The Fortunes of Indigo Skye

The Fortunes of Indigo Skye by Deb Caletti (2008) 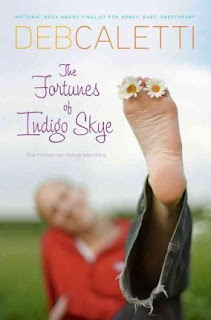 Indigo Skye is graduating from high school soon, and she plans to continue her job as a waitress. Her friends and family don't understand why she doesn't want to go to college, but she loves waitressing and is good at it. When the mysterious Vespa Guy starts appearing at her cafe however, her job becomes even more interesting. Especially the day he leaves her a $2.5 million tip. Indigo is convinced her life will be the same - just with more money - but of course her new fortune changes everything. Or does it?

Indigo is smart and clever and her narrative voice carried the story. I loved her observations about her coworkers and the regulars at the diner, and her relationship with her family and friends. She was witty and sarcastic and that made this story very fun to read.

On the very first page Indigo declares how much you tell about a person by what they order for breakfast, citing one of the regulars as an example. After Nick's wife died, suspicious eyes turned toward him but Indigo maintains that a murderer would order something meaty. She says "I've never served anyone who's killed his wife for sure, so I don't know this for a fact, but I can tell you they wouldn't order oatmeal with raisins like Nick Harrison does. No way...Nick Harrison was cleared of any charges, and still he's destroyed. Oatmeal with raisins every day means you've lost hope." This is a gal I like spending time with.

I couldn't help but compare it to the narration of the last YA book I read, Pushing the Limits. Caletti manages to achieve what I think the other author was trying for, but instead of sounding awkward and forced it comes out in a style both effortless and natural. From a scene in an airport: "God, I hate presumptuous, overachieving appliances...My inability to control an automatic faucet has zapped my confidence, and so I sit back down in a hard plastic chair formed to the supposed contours of my body and look around for possible terrorists instead."

Aside from the fantastic narrative voice, it's also just a great premise for a story. One always hears about people who come into a lot of money and their lives are changed for the worse, and it was easy to see how that can happen. Everyone around Indigo seemed more than ready to help her spend her money - her boyfriend notably made an assumption that the money was theirs and not just hers - and she became a bit tight-fisted, hating her own reaction. But I think it's the same reaction anyone would have. During the requisite gratuitous shopping spree scene, I wanted to yell "Indigo, no! Don't spent all your money on this crap!" But she's a teenager, and it was probably what a teenager would do. It was all fascinating.

Deb Caletti has apparently written a number of young adult books, but this is the first one I've read. I hadn't even heard of her until I got this book as a gift, and that's a shame. The Fortunes of Indigo Skye even made ALA's list of Best Books for Young Adults. I can see why - what a treat!
Posted by 3goodrats at 9:45 AM