The Tea Rose by Jennifer Donnelly (2002) 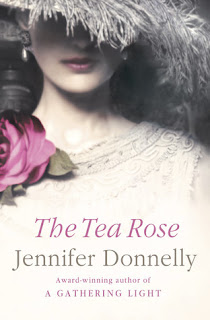 In 1888 in Whitechapel lives a young woman named Fiona Finnegan. Her family doesn't have much, but they're happy. Fiona is looking forward to marrying her childhood sweetheart Joe Bristow, who lives just down the road. But trouble is brewing in London. The unions are stirring up unrest in underpaid workers like Fiona and her family, and a man known only as Jack the Ripper is murdering prostitutes. Just when she's on the verge adulthood and marriage, events converge to rip from Fiona everything she found worth living for. Soon she finds herself on a ship to New York where she plans to start a new life, but she won't forget the past and everything she has lost.

There are so many good things in this novel that I hardly know where to begin. Let's start with the setting: Victorian London. That's all I really need to make me happy, but Donnelly writes about it in such lucid detail I felt completely transported. I was reminded of Sarah Waters' Tipping the Velvet, that's how good it was. Fiona worked in a tea factory, her beau in a vegetable market, and the details of their work and home lives were described enough to give you a real sense of what it was like - the sights, smells, and tastes - without bogging you down too much. Plus, Jack the Ripper!

Fiona is now one of my favorite characters. I always like a headstrong, independent woman ahead of her time and she is definitely that. Amazingly strong and resourceful, Fiona endured a great deal of tragedy and rose above it, using her grief and anger to fuel her drive to success. Watching her turn around her uncle's business in New York before opening up her own was incredibly satisfying. Another favorite character was Nicholas Soames, who Fiona befriends on the ship from London. I don't know how realistic it is that she is so accepting of a gay man in that time period, but I enjoyed their close friendship a great deal. Without spoiling anything, I'll just say that it became very touching and, dare I say it, poignant.

There is just so much more here, in terms of plot and characters, but I don't want to reveal too much because it's just so wonderful to experience it all unfolding. It's amazing that it all takes place in a ten-year period. Fiona must be exhausted. It's a long book too - my copy is around 550 pages. But unlike some long books I've read, I really savored every bit of it and even feel happy that there are two sequels. I probably won't get to them right away, but I will at some point. I picked this for the Staff Picks Book Group at my library and can't wait to hear what everyone else thinks of it.
Posted by 3goodrats at 7:49 PM