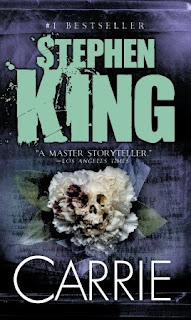 I think everyone is familiar with this classic story of a high school outcast using the powers of her mind to get back at those who have bullied her too many times. In high school I read Carrie at least a handful of times and have always remembered that famous shower scene vividly. I loved everything by Stephen King (I grew up in Maine, after all) but kept coming back to this one. It's now been over twenty years since I last read it, although not long ago I finally saw the movie. I was afraid a movie that old wouldn't stand up over time (I was disappointed when I finally saw "Children of the Corn" a few years ago) but I enjoyed it and found Carrie's mother perfectly terrifying, even more so than I remember from the book.

Reading it again after all this time was a lot of fun. First, it really brought home the degree to which Stephen King's writing has gotten more sophisticated. Carrie is character-driven for sure, but nobody is fleshed out as much as in his more recent books. It's forgivable though, because it's just such a great story.

More importantly, it holds up over time and is probably the best book about bullying EVER. It was written way before bullying became the hot issue it is today and I think it's a lot better than recent books I've read on that theme. Carrie's classmates are wonderfully complicated, some clearly bullies and others just going along with the crowd. Sue Snell is an incredibly realistic character - as you may remember she is the one who felt terrible after the whole "plug it up" incident in the locker room, and convinced her boyfriend to ask Carrie to prom. He, too, was pretty nice about the whole thing and sympathetic to Carrie. But then of course the pig blood happened and all his and Sue's efforts were for naught.

I remembered Carrie's mother as being fanatically religious and it was only upon this rereading that I realized she wasn't so much religious as she was a raving lunatic. I mean, Margaret White thought that sex even within marriage was a horrible sin. No church on earth would condone this woman's views.

Had this been written more recently, King surely would have fleshed out Margaret White's background more and dwelled upon the confining nature of Carrie's life in that household, but we got enough of it for the story to be effective. I had forgotten that the novel was structured to include excerpts from some fake books about the incidents of Prom Night and about Carrie's life, so that was fun to rediscover. Although Carrie was written in the late 70s (and rescued from the trash by Tabitha King) it is a timeless story that is still good and will hold up for years to come.
Posted by 3goodrats at 8:11 AM