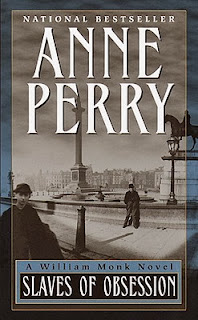 Investigator William Monk is hired to find the parties who are trying to blackmail a gun dealer named Daniel Alberton. But that is not Alberton's only problem - America is in the midst of the Civil War and he has promised to sell a large quantity of guns to the Confederates. Their representative is present when Monk visits, and they are soon joined by a man named Breeland who represents the Union and urges Alberton to sell to his side instead. But Alberton will not go back on his word infuriating Breeland as well as Alberton's own daughter Merrit, who is romantically interested in Breeland. A heated exchange about the war and slavery is followed later that night by a murder, and soon William Monk and his wife Hester find themselves on their way to war-torn America in search of a killer.

I hadn't expected to pick up another Anne Perry mystery so soon, but I needed something comforting and familiar. After finishing When Nights Were Cold, I didn't know what I wanted to read and started about 5 different books, finally settling on MASH Angels and Slaves of Obsession which I ended up reading concurrently. Do you ever get in that sort of a reading funk where nothing seems right? It happens rarely, but I really hate it. I know by now that all I can do is pick something and force my way through while waiting for the feeling to eventually pass. It's a good time to pick up a book where you know what to expect.

There were, however, a couple of things especially interesting about this one. First, the Civil War. This was unexpected but welcome. Slavery is a part of our history that no matter how much I read about it is still somehow difficult to believe, and I liked seeing it from the perspective of the British. But also, the trip to the US during the war was a great opportunity to see Hester in action as a nurse. My favorite part of the story was when Monk and Hester were searching for Breeland and Merrit who had run off together and were suspected murderers. They found Merrit right away and she joined Hester on the battlefields helping wounded soldiers. One of my favorite aspects of this series is Hester's experiences as a nurse and though we learn a bit about her experiences in the Crimea, those are told through flashbacks. I was very happy to get to see her in action on the Civil War battlefield.

Another important thread in this series is Monk's memory loss. In the very first book he wakes up after an accident and cannot remember anything about his life before, or the person he once was. Slowly he discovers things here and there and doesn't like what he learns about himself. In the course of this investigation he stumbles across someone he knew in his previous life and learns something about himself that is especially distasteful and about which he feels quite ashamed. This would have been bad enough before, but now that he is married to Hester - and doesn't keep anything from her - he worries about her reaction when he tells her. This all adds a bit of extra tension to their relationship while all these other events are going on.

I'm over halfway through this series - it's up to #19 as of this year - and still enjoying it. I think now I'm caught up to the point where I can start getting the audio version again (the last few weren't available) so I look forward to that for the winter!
Posted by 3goodrats at 6:53 PM