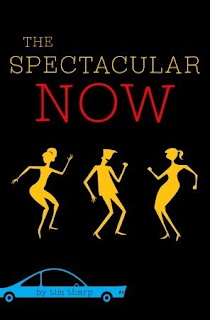 Sutter Keely is a fun-loving guy. He's the life of every party, the ladies love him, and if he's barely making it through high school, that's ok - it will all work out in the end. He even has the best girlfriend a guy could want. But things take a nose-dive in the relationship department and next thing he knows, Sutter is single again, and wakes up hungover on a strange lawn. He is greeted by a girl from school named Aimee, a quiet and pale girl who likes science fiction and horses (preferably together.) Sutter decides to do her a favor by pretending to like her, thereby boosting her confidence and putting her in a better position to find a real boyfriend. He just keeps saying what he thinks she wants to hear until he's in way over his head.

This book is very thin on plot. I kept waiting for something to happen and nothing really does. It really is just a story about his love life (with a tiny, tiny subplot about his absentee father). It didn't go anywhere, and I didn't feel like Sutter grew or changed or learned anything during the course of the book.

But I enjoyed his voice. Sutter is drunk, grandiose, and philosophical. He wants people to feel better about themselves, and truly does see the good in most people. He is one of the least judgmental characters I've met, but he's not very realistic, and is prone to lying if he thinks it will make someone feel better. He very earnestly wants everyone to be happy, but doesn't foresee the consequences of his actions. He's so laid back that he doesn't understand why others get jealous, for instance, and somehow he makes it seem like they are the unreasonable ones just for being human and somehow he's a better person for not letting things get to him. I wouldn't want to date him, but feel a little bad for saying that because, although he's a directionless mess, he has the very best of intentions.

The story takes place in Oklahoma and the audiobook narrator has what I must assume is an authentic accent. I wasn't sure how I'd like listening to it at first, but ultimately I couldn't imagine Sutter sounding any other way (and based on the trailer, the movie Sutter Keely is all wrong. He doesn't look right, either.) This book was all about the character, and I think the narrator made me like it more than I would have if I had read it in print. I probably wouldn't have picked this up if it wasn't chosen for my book group, but I found it pretty enjoyable even though it didn't really seem to have a point.
Posted by 3goodrats at 8:57 AM