Briefly, I thought I'd have another finished sweater to show you today. Instead, my sweater is languishing in a heap waiting for me to seam the sleeves and knit the neckline.

A couple of weekends ago I was out of town visiting with family and managed to knit almost half a sock. Then I mostly ignored it until last night when I knit the heel flap. Here's a peek. 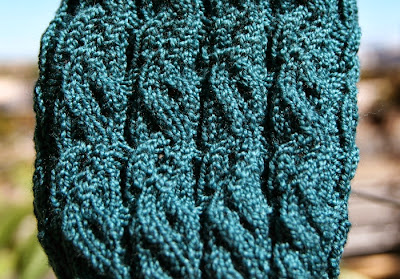 It's difficult to make a partial sock look good. I have it stretched over my hand in an attempt to give a better idea of what the pattern looks like. It's sort of an openwork cable.

I've had this yarn sitting around for a few years now. I think it's Cherry Tree Hill Supersock Solids, but can't be sure because I lost the label when I wound the yarn and that was probably a year ago. It's 100% merino so these socks will need to be darned over and over and likely won't last long. But I already own the yarn and it's a pretty color, so why not?

This pattern is Sunshine from Cookie A.'s book Sock Innovation. I grabbed the book, yarn, and needles on my way out of the house for my trip and picked the pattern later at my destination. So it was only upon my return home that I saw the errata and various comments on Ravelry about the mistakes in the pattern. The official errata is minor, just a small change in the setup row, definitely not worth ripping out and starting again. The other online comments are more major and concerning. Apparently the cables are crossing the wrong way or something, but although the publisher was contacted, the errata was not updated. Does this mean the publisher is not being responsive? Or is the pattern not really incorrect?

For me, there's no going back now and I think it looks fine. Maybe at some point I'll try them on and think it's obviously completely screwed up, but do you know what? They'll still keep my feet warm.
Posted by 3goodrats at 12:55 PM

I love that colour :)