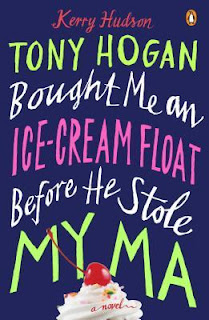 Janie Ryan is born to an Aberdeen fishwife in the early 1980s and right off the bat the two of them end up in a women's shelter. This is followed by a succession of shoddy council housing and a string of unsuitable boyfriends for Janie's Ma, bumping them from one situation to the next so quickly that change is the only constant.

This isn't a plot-driven story, but more like a slice of life. We follow Janie from birth until she comes of age, all in first person. It seems like this narration would be hard in the infant stages, but it was actually quite clever. I liked seeing working-class people and their lives through the eyes of a child who doesn't know any other life. Her outlook was so positive and happy despite conditions that others (including me) would find downright depressing. As she grew up, she learned a lot from her experiences and I feel like it just made her stronger.

Janie's Ma is a heavy drinker who regularly makes poor life choices, but is devoted to her daughter and strongly determined to make a decent life for her. She was fairly resourceful and quite resilient, putting up with a lot of crap along the way. I found everything about the British welfare system quite interesting, like how they lived in B&B's a number of times for instance. That sounds very posh (to borrow a British term), but it really wasn't at all.

The language might be difficult for some readers, but I got used to it after a page or so. (I've also spent time in Scotland, which may have made it easier.) "And" becomes "an'", "you" is "yeh", and there is a lot of British terminology, which I think just gives it an extra genuine flavor.

Despite the poverty and other hardships, for the most part I found the story fairly upbeat and optimistic. Janie didn't dislike her life, aside from her mother's boyfriends, or spend too much time wishing she had more. She was around a lot of poor people so they were all in the same situations. I think this might be the first book I've read about people living in poverty that wasn't completely bleak, and I really enjoyed it a lot. Kerry Hudson has proven herself a fresh new voice and I look forward to see what she brings us next.

This novel has been available in the UK for a while, but will be published in the US in early 2014.

I received this galley free from Penguin First Flights, and was not compensated for this review.
Posted by 3goodrats at 9:41 AM