When Nights Were Cold

When Nights Were Cold by Susanna Jones (2012) 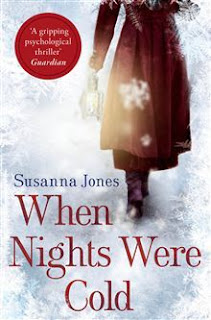 In the early 1900s women are not encouraged to pursue higher education, never mind embarking on dangerous journeys of exploration, but Grace Farringdon dreams of doing both. She defies her mother's wishes and begins college, where she quickly forms an Antarctic Exploration Society with other like-minded women. Fast forward 15 years and Grace is a virtual prisoner in her family home, the only survivor of her Society. Haunted by the ghosts of her past, her mental health deteriorating, Grace may finally be ready to confront the terrible events of her youth.

Growing up, Grace plays an exploration game with her father where they move objects like buttons and thimbles across a map, representing the explorers Shackleton, Scott, and Wilson who were at that time exploring the Antarctic. Grace's older sister, Catherine, was usually at the piano, though her dreams of being a concert pianist were ultimately crushed when her parents refused to let her go to music school. It was a strange family, loving in some ways, and completely stifling in others.

The book shifts back and forth in time, the past slowing work itself towards the present we keep seeing glimpses of. We know at the very beginning that Grace has lived through some sort of tragedy. She hasn't seen her sister in years, though they used to be so close. Grace keeps trying to write Catherine a letter inviting her to stay, but struggles to finish and send it. She is clearly worried about writing it exactly right and enticing Catherine to come live with her, and afraid of just pushing her away forever. The tragedy that claimed the lives of her college friends hovers nearby and we learn more and more as the back story progresses.

As you can see from that big red dot on the cover, the Guardian called this novel "A gripping psychological thriller." This description is baffling because, although there are psychological elements to the story, this is no thriller. There's also a quote on the back cover of my edition that refers to a scene that never took place. Perplexing. Not to mention that the Goodreads description and jacket copy sound like two different books. Never mind - I heard great things about this book in a podcast - I think it was The Readers - and I'm very glad I read it.

I was entrance by the very idea of a woman at that time who was so interested in exploration and who felt compelled to climb mountains. Many parts of the story were murky and dreamlike, either because they held the quality of memories or were illustrating Grace's mental decline. It was pretty fantastic. Her relationships with her mountaineering friends Cicely, Leonora, and Winifred - all dead now - were complex, to say the least.

This is my first book for the R.I.P. VIII Challenge and although it didn't turn out to be a thriller, it was certainly dark. Death, doomed romances, and a whole lot of crazy combined to make a pretty compelling story. If I was young again and could stay up until the wee hours reading, I would have done so. As it was, I sat in bed desperately trying to keep my eyes open while I read the same sentence over and over because I couldn't admit defeat and put it down for the night.

I ordered When Nights Were Cold from Amazon UK because, tragically, it's not available in the US. I cannot imagine why. It was absolutely worth the price of postage and I recommend it to any of you who can get your hands on a copy.
Posted by 3goodrats at 8:15 PM