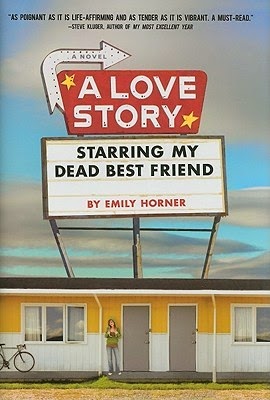 Cass's best friend Julia was working on a top-secret project for months. Then she died suddenly, and her friends discover the project she left behind - a musical called Totally Sweet Ninja Death Squad. Cass isn't really one of the drama people, so she is on the sidelines as the musical begins to come to life. When her arch-nemesis Heather is cast in the leading role, Cass decides to get out of Dodge. She and Julie had planned a cross-country trip together to California and Cass decides to do it alone on her bike, with only Julia's ashes as company.

The story moves back and forth between "then" and "now." The "then" parts are immediately after Julia died and recount how Cass came to decide to bike to California, and then follows her along on the trip. The "now" sections are after the trip, starting sometime during the summer. I've become rather weary of this construction, but here it's especially weird because the two different time periods are so close together. It was almost confusing in parts.

For some reason, there is nothing like the production of a musical to give a young adult book a spark of life. This is no Will Grayson, Will Grayson but it still has that fun high school musical excitement. Julia's show, though unfinished and a little rough around the edges, is wacky and unusual and as required with any high school project, there's as much drama behind the scenes as in the show itself.

I think the best part about the book is the message. People in this book are mean to each other, they do and say things that hurt. As is the case in real life, they aren't doing it just to enjoy being mean; it's because they are hurting too, and don't know how to handle it. This book is ultimately about forgiveness and second chances, and that's a message I can get behind.

Most of the characters are not very well-developed, which is fairly typical when there's a whole group of friends in a relatively short book. Jon's one defining characteristic is being gay, and Amy and Lissa were pretty interchangeable. But it wasn't about them, it was about Cass and Julia and Heather, and to a lesser extent, Oliver, and they all were developed decently enough to garner my sympathy.

This was a good enough story, but despite it's positive points it didn't grip me. Somehow it lacked tension, and I don't know if it's because of the way the story was constructed or because all of Heather's meanness was so far in the past it felt almost irrelevant, or for some other reason. Still, I liked Cass's determination and generous nature and the way the characters were able to look past each other's faults and see the good parts, plus Horner's writing style is clean and simple, and her observations pretty spot on. She seems like someone who really remembers what it's like to be a teenager.
Posted by 3goodrats at 9:59 PM