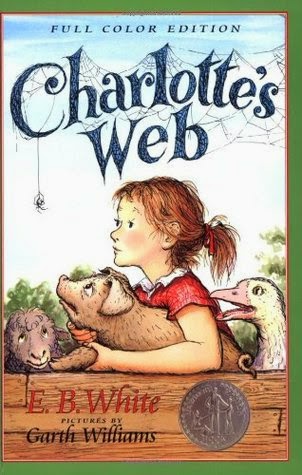 As far as I know, this was my first time reading Charlotte's Web. It's entirely possible I read it as a child eons ago and just forgot. But it seems like the sort of story I would have remembered so I think somehow I actually did manage to miss it.

For anyone else who also passed this one by, it's about a little girl named Fern who saves a runt pig and names him Wilbur. Wilbur befriends a spider named Charlotte who lives above his pen, and when they learn that Wilbur is to be slaughtered in the fall, Charlotte devises a plan to save him.

I've always been a sucker for an animal story, and I found Wilbur to be quite a charming pig (though I must admit I've never met a pig I didn't like.) His unlikely friendship with a spider was actually rather touching and I found Charlotte rather appealing for an arachnid. I've got to respect someone so clever, even if she has far too many legs for my comfort. There was a supporting cast of sheep and a rat named Templeton, all of whom were rather mean or selfish, I suppose to highlight how kind Wilbur and Charlotte were to each other.

This edition was illustrated by Garth Williams, whose style was instantly recognizable from my many readings of the Laura Ingalls Wilder books. I've always liked the way his drawings are simple without being cartoonish or cutesy, and they are very integral to my memories of the Wilder books. I was happy to recognize him here.

I'm kind of interested in how childhood is treated by different generations, and couldn't help but take note of a passage that described a swing hung from a hayloft that was apparently both exhilarating and terrifying:

"Mothers for miles around worried about Zuckerman's swing. They feared some child would fall off. But no child ever did. Children almost always hang onto things tighter than their parents think they will."

Are there still parents who would let their kid swing on a swing they thought was dangerous? Or would Zuckerman haven taken it down from fear that a kid would get hurt and he'd be sued? Or was this not even representative of parenting at the time it was written? I realize I'm putting way too much thought into something minor, but this is what happens when I read children's books as an adult.

Although I didn't find it sad like I was probably supposed to, Charlotte's Web was nevertheless an endearing little story and I'm glad I finally took a little time to read it. Better late than never!
Posted by 3goodrats at 8:09 AM