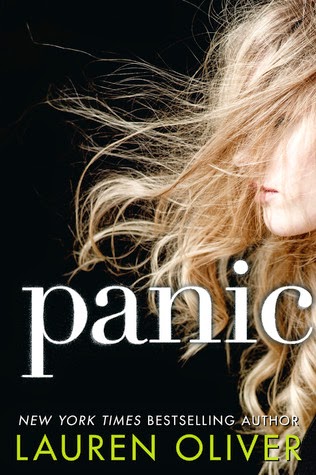 In the small town of Carp, high school seniors get themselves through the long, boring summer with a game called Panic. Players must compete in a number of challenges, some of which are dangerous and all of which are terrifying. The stakes are high, but the reward for winning is enough money to change your life.

This summer, we experience Panic through two players, Heather and Dodge. Heather never expected to join, but the promise of a huge pot of money was too much to resist. It would get her - and her little sister- out of the house they share with their irresponsible, train wreck of a mother and into a better life. Dodge is playing for revenge. His sister was permanently injured in Panic a previous summer, and this year Dodge is up against someone who he holds responsible and he is determined to win by any means necessary.

The premise of Panic is intriguing. I like the idea of it, the dares, the way they played off the kids' fears, and how nobody knew who the judges were or what the next challenge would be until the time came. It was pretty intense. During the entire book I thought there is no way in hell I would have done these things, as a teenager or now. Run blindfold across the highway with only the sound of the traffic to guide you? No thanks.

But the challenges were inconsistent. Some were just creepy and would make your skin crawl, but weren't dangerous. Others were potentially deadly. And not all kids did the exact same ones, so you'd think they would protest this unfair disparity but they didn't.

I found it really strange that Heather was totally ok with performing death-defying dares that, quite frankly, were stupid and risky, but was a super goody two-shoes about things like drinking and sex. In fact, early in the book she said she didn't understand the big deal about making out. This makes her sound like she is 12 rather than 18. This is a bit of a tangent, but I'm getting so tired of young adult books propagating the stereotype that only boys are interested in sex, and for girls it's just currency to give or withhold and they aren't actually interested for pleasure's sake. It's maddening.

I was also a little frustrated with certain aspects of the relationships between characters. Some of the tension is based on misunderstandings caused by jumping to conclusions or just not listening. For instance:

Seriously, Lauren Oliver, you can do better than that.

A few strange interactions didn't ring true to me. For instance, one of the characters gets a text from his mother that just tells him to get to the hospital immediately, so he totally freaks, tries to call her back, she doesn't answer, and he rushes to the hospital to find that it's actually good news and they TOTALLY COULD HAVE MET SOMEWHERE ELSE. And the mother didn't apologize for scaring the kid half to death. It felt so contrived.

The narrator was good enough in general, but I found some of her voices shrill and grating.

Panic wasn't bad, but Oliver's other books are a lot better. If you are really intrigued by the whole idea of the game of panic, it's a decent book but I'd pass on the audio and read the print if I were you.
Posted by 3goodrats at 8:27 AM