Before we get to the knitting, you may have noticed that my blog was down for two days during the week. Super annoying. This has now been fixed permanently and it should be smooth sailing from here on in. Yay!

Also this week, I finished a pair of socks. 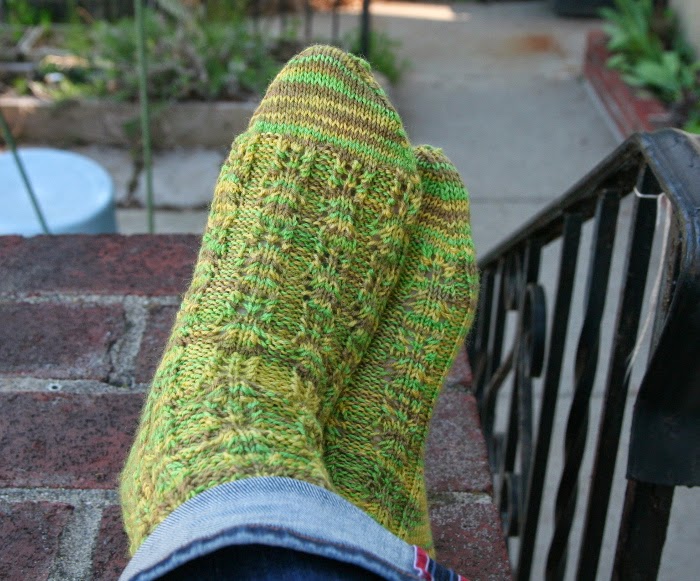 I began them, I think, during the 14th month of winter when I was desperately craving something green and alive-looking. While reorganizing my yarn stash I had come across a couple of skeins of Lorna's Laces Shepherd Sock that I totally forgot I had. That's the kind of surprise I like.

The pattern is from Sensational Knitted Socks, and is called Traveling Rib Eyelet. I never gave it a second look before, but this time I was looking particularly for something a bit open and lacy but not too complicated. I decided to just try it out for a pattern repeat and see what I thought, and I ended up liking it more than I expected to. Eventually I was able to go at a pretty steady pace without having to look at the pattern much, which is nice while knitting on the bus.

Until now, I haven't even touched the colorwork sections of Sensational Knitted Socks, though I've looked through the patterns many times. I've had problems in the past finding solid color sock yarns, especially in enough colors that there's two I like that go together well. But recently I decided to spring for some blocking mats from KnitPicks and added a few skeins of sock yarn to my order especially for colorwork socks. I'm looking forward to finally trying those patterns!
Posted by 3goodrats at 5:39 PM