The Notorious Benedict Arnold: a true story of adventure, heroism, and treachery by Steve Sheinkin (2010) 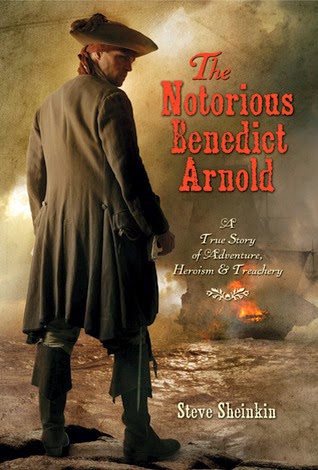 This winner of the 2011 Boston Globe-Horn Book Award for Nonfiction recounts the life and career of Benedict Arnold, revealing many details that most people are probably completely ignorant of. Beginning with his birth and childhood, The Notorious Benedict Arnold tells the story of a young man whose family was hit hard by tragedy, but remains ambitious and goes on to become a military hero. Feeling slighted of the recognition he feels he deserved, he makes the fateful decision that seals his reputation forever.

I am distressingly weak on U.S. history, and all I knew about Benedict Arnold was that he was a traitor. The real story, of course, is much more complicated. Not the betrayal, that was pretty clear, but the fact that Benedict Arnold was a respected military hero previously. It's a shame that we reduce historical figures to such black and white characters. Everyone has to be either all good or all bad, and therefore we end up missing a lot of the story.

It took me a little while to get into the book, but it became pretty exciting in parts, especially near the end. This is exactly the kind of history book that I like reading - the kind with a narrative that makes the people and events seem real. I know they are real, but rattling off names and dates and events without showing you what they would have looked like (and skipping all the interesting personal details) is a recipe for a nap during class. Here, we don't just read that Arnold led troops to Quebec, we hear everything about this harrowing trip that left his men hungry and shoeless, wearing rags and barely able to stand. (This style reminded me a lot of American Uprising, a book about a large slave rebellion which I read a few years ago and which included the same kinds of details to make the events seem more like a story than a textbook.)

Written for young adults, I'd say that unlike many other YA nonfiction books this one is pretty definitely for teens, not children. It's a fairly meaty 300 pages, not including notes, and it's all text. As much as I enjoy the more borderline titles that include a lot of interesting photos, this is definitely a more detailed story. If you're interested in a more accessible book about U.S. history, or just a different story about the American Revolution than we usually hear, you might find this of interest.
Posted by 3goodrats at 10:00 AM