Thunderstruck and Other Stories

Thunderstruck and Other Stories by Elizabeth McCracken (2014) 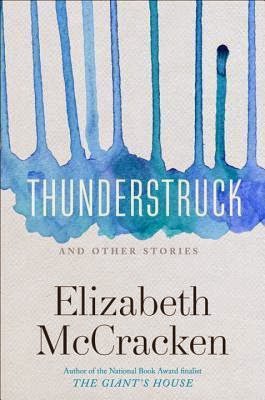 Elizabeth McCracken's long-awaited (at least by me) new book is a collection of nine short stories, culminating in the title story "Thunderstruck." The longest story in the collection, it is possibly also the most heartbreaking, which is saying a lot for this book. A family reacts to their daughter's troubled, wild behavior by packing up the entire family and going to France. Convinced that she's doing so much better and their troubles are over, at least for now, they are completely blindsided by tragedy.

"Property" surprised me when I began reading it and realized it wasn't the first time. I poked around and found that it was included in The Best American Short Stories 2011, and for good reason. A man named Stony plans to bring his German wife to Maine and they rent a house. But before they can leave Europe she dies suddenly and he arrives at the rental, eventually, alone. He dislikes the house intensely, boxing up its contents and storing them in favor of his own things. The tension, and contention, between Stony and the family who own the house is discomfiting.

In perhaps the most unusual and surprising story, "Some Terpsichore," a young woman becomes a singer to accompany a man who plays the saw. They form an act and also a relationship. Eventually, she is forced to face the truth about the man she fell in love with, and also about her singing. She still has the saw.

"Juliet" takes place in a public library, clearly recognizable as a library where I used to work (McCracken worked there as well but, alas, not at the same time as me.) A librarian recounts a violent crime committed by one library regular upon another (though not at the library), and expertly captures the way we all see only certain aspects of people's lives, but not others. It's a strange kind of voyeurism that we librarians practice.

I had a moment of sadness when I finished reading and realized that again, already, I have no more McCracken to read because I've read all her stuff. I'm actually tempted to go back and start from the beginning. Sometimes I find short stories tough to read, especially the longer ones, but I just enjoy her style so much that I don't care what it is. If she wrote poetry I'd read it, or a play, or  a western.

It's difficult to pinpoint what it is that grabs me in such a particular way. The stories are moving and surprising and poignant, the characters just quirky enough to be real, but the moments that give me the most satisfaction are when I come across descriptions like "It looked as though someone had taken a potting shed and turned it inside out" and "...a sunroom beyond seemed an asylum for insane and injured furniture." Or the observation, "People take their hands with them, no matter where they go." The way she writes just makes me see things differently and it can be jarring in the best possible way.

Each story contains so much that it's sort of shocking when you think about it. The night I read the first story in the collection, "Something Amazing," I put the book down and marveled at how much happened in those 16 pages. I felt like I knew these people, everything about their lives, what has already happened and what hasn't even happened yet, and how does that all get crammed into 16 pages and still have room for such clever, vivid language? It's like her stories are bigger on the inside. They are the TARDISes of stories.

I can't really say enough to recommend this collection. Elizabeth McCracken has long been one of my favorite authors and she continues to prove her skill here. Even if you think you don't like short stories, I suggest you give these ones a shot. They are excellent.
Posted by 3goodrats at 8:49 AM