Mastering the Art of Soviet Cooking

Mastering the Art of Soviet Cooking: a memoir of food and longing by Anya Von Bremzen (2013) 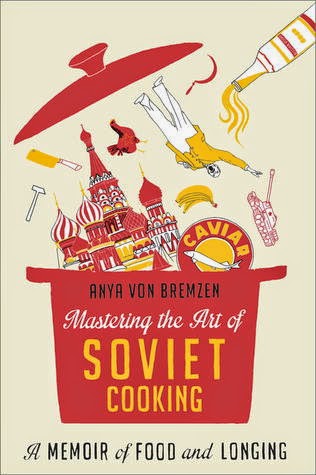 Born in the Soviet Union in 1963, Anya Von Bremzen formed the same kind of fond childhood food memories as we all do, but hers are tainted by the propaganda of communism. After emigrating to the US at the age of ten, she pursued a career in music before falling into food writing. Here she unpacks her food memories - her "poisoned madeleines" as she calls them - and uses them to tell the story of her childhood, her family, and life in the Soviet Union.

Based on the prologue, I thought each of the following chapters would be framed by a story in which Anya and her mother cooked a Soviet dish representative of that decade, but it wasn't so neat and tidy. For instance, the chapter on the 1930s mentions a get-together for 1930s food but it's only about a page and recounts their conversation, not the food. More room than I expected was devoted to the political and historical context. From Tsar Nicholas II to Vladimir Putin, the political climate was present in every chapter as the author traces the lives of her grandmother, her mother, and herself.

It was ambitious, and she pulled it off quite expertly. Not counting the recipes in the back, the entire book was about 300 pages and she managed to fit in a great deal of family history, what felt like the entire history of 20th century Russia, and still a lot of food talk. I'm not sure how it was all crammed in there, but it still managed to be pretty well put-together.  Reading it was a little tough in parts, since I tend to struggle with history, but she always pulled the story back to more familiar and easy-to-read ground.

I know the Soviet Union isn't the first place we think of when we think about cuisine, but I've always had a soft spot for Russia (and I do enjoy a good bowl of borscht). Something about the character of Soviet food really does seem perfect for such an eclectic mix of comedy, tragedy, and memory.
Posted by 3goodrats at 9:53 PM