Lean In: Women, Work and the Will To Lead by Sheryl Sandberg (2013) 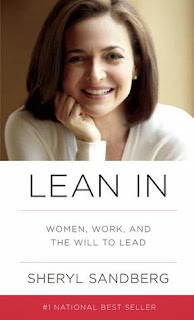 Facebook COO Sheryl Sandberg examines why women are still not holding leadership positions at even close to the same rate as men. She tells stories from her career, rounding them out with facts, statistics, and information gleaned from studies. In addition to all the external societal factors, she says much of what holds us back is internal. Sandberg also includes concrete advice to help break through these barriers to achievement.

I had many "YES!" moments while reading. Early on, Sandberg talks about a common experience among women when being praised that we feel undeserving and guilty and will be found out. This "impostor syndrome" is part of a larger problem of women consistently underrating themselves and, therefore, not reaching as high. She cites a report from Hewlett-Packard which discovered that women only apply for jobs if they meet 100 percent of the criteria, whereas men apply if they meet 60 percent. I've heard this before - it was one of my major takeaways from Library Leadership Massachusetts and changed the way I was conducting my job search.

External factors also hold us back as well, but women are just as guilty of gender discrimination as men are. In one memorable study, people of both sexes were given resumes to review and evaluate. The resumes were identical except for the first name of the candidate - one was a male name and one a female name - and yet the evaluators consistently rated the male resume higher. This includes the female evaluators. Sandberg also recounted an experience where she was called out after a talk for continuing to take questions from men in the room after saying she was done with questions. The women had all put their hands down, but the men didn't so she kept taking their questions.

Some have criticized that Sandberg takes a narrow view of women, only writing about wealthy, heterosexual women. Although she occasionally throws in some facts and statistics outside of this limited scope (such as when she notes that same-sex couples share household responsibilities more equitably) that is largely true. But so much of this book comes from her experiences that it would be presumptuous to try and speak for women in vastly different situations from herself. I'd love to read a book about similar issues as applied to more working-class women, but I just think that would be a different book written by a different author. I'd love to compare the experiences though.

Two or three chapters are devoted to the problems of balancing motherhood with career, a well-worn topic that is not relevant to me or the growing numbers of women who are deciding not to have children. Obviously it is a necessary topic in a book about women and their careers, but I could have stood a bit less of it. (Women with children may feel differently.) It was still fairly interesting though. Sandberg notes that the media and many individuals continue to remark on how she balances her career with motherhood, yet never ask the same questions of her husband or other fathers with high-powered careers.

I should also note that Lean In is less than 200 pages and reads easily because of Sandberg's conversational tone. If you're still trying to decide whether or not to try it, I recommend watching her TED Talk which is quite inspiring. Even though I have no desire to lead a company I found a lot of valuable insight in Sandberg's book. I really enjoyed it, and I think there is something for everyone to learn from it.
Posted by 3goodrats at 9:00 AM