Bossypants by Tina Fey (2011), narrated by the author 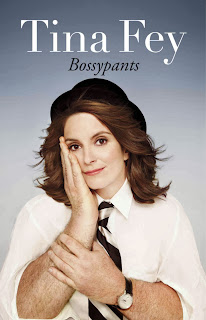 I first read Bossypants back in 2011 soon after it was published. When I heard how good the audio was, I rather wished I had listened instead. My interest was renewed while reading Lean In, in which Fey was quoted a number of times, so last weekend on a long drive to and from Maine I finally listened.

I wasn't quite as impressed with the audio version as I had hoped. Fey still sounds more like she's reading than talking, which I suppose is just because of the style of her writing. There were bits I couldn't hear because she drops her voice, and my car is rather loud. If your car is more of a luxury vehicle than my Toyota Yaris, this may not be a problem for you. But just be aware, the volume of her voice varies quite a bit. Still, it was enjoyable and just the right mix of smart and funny for a car trip. (Also, note that the book has a number of photos. They're included on one of the CDs, but obviously impossible to look at while driving.)

Looking back at my previous review, I can see that I focused more on her personal stories than her career. Because I just finished Lean In, this time I was especially interested in her work experiences. Comedy has its own set of unique problems, it appears, such as a strangely common idea that women aren't funny. Which just led me to spend 20 minutes watching clips of Saturday Night Live on YouTube. Now, where was I? Oh yes. Tina Fey doesn't fucking care if you like it. I'm pretty sure that's exactly what she says in the book: "We don't fucking care if you like it." When men dismiss ideas like Kotex Classic, it's because they are men and don't understand, not because it isn't funny. Another stumbling block Fey ran into was the idea that nobody would be interested in a sketch that featured only women, proved very wrong by sketches like this one about a joint message from Sarah Palin and Hillary Clinton, which is not only one of the most memorable moments on SNL but contains a very real message about women and the media.

Like Sandberg, Fey also addresses the problems of working mothers, as well as general observations about the expectations that come with being female. She acknowledges the pressures to look a certain way, but dismisses them, and that is the real crux of her brand of feminism I think - she chooses not to care what others think and what they expect from her and instead trusts in herself. This message goes hand in hand with Sheryl Sandberg's and these two books compliment each other nicely. If you still haven't read Bossypants, give it a shot. You too will be inspired to head over to YouTube and rewatch all of your favorite Tina Fey moments.
Posted by 3goodrats at 1:48 PM