The Sweetness at the Bottom of the Pie

The Sweetness at the Bottom of the Pie (Flavia de Luce #1) by Alan Bradley (2009), narrated by Jayne Entwistle 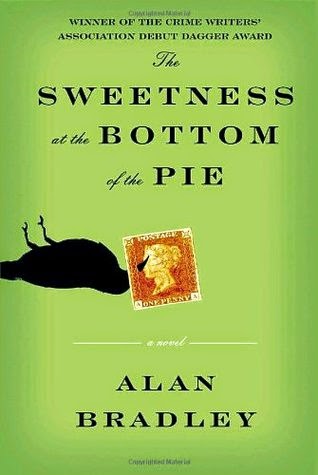 One morning at Buckshaw, the housekeeper opens the front door to find a dead bird with a postage stamp impaled on its beak. Later that night, 11-year-old Flavia hears her father arguing with a mysterious stranger in his study. Just hours later, she happens upon a dying man in their cucumber patch, who utters one mysterious word before expiring. Is this the man her father was arguing with? Did her father murder him? Is the dead bird related and, if so, what does it mean? Flavia sets off to get to the bottom of the case, investigating people her father knew in his youth, including a man named Twining, who he claims to be responsible for killing.

Flavia is the sort of character generally described as precocious. She's not really believable as an 11-year-old, but I was able to look past that because of her many fine and amusing qualities. She was smart, resourceful, witty, and very interested in chemistry (especially poisons). Luckily, Bradley made sure she did seem like a child in some ways, such as using her chemistry knowledge to try and poison her sister (non-lethally, of course).

In the course of her investigation, Flavia learns a great deal about certain very valuable postage stamps. Her father is a collector, and it was the destruction of an extremely rare stamp that led to the suicide of "old Twining" for whose death he blames himself. She also manages to put her knowledge of chemistry to good use.

The narration was excellent, but I think this is one that would have been better for me in print. I kept getting lost when someone started telling a story about the past. In print it was probably only a page or so, but it always feels longer in audio. At the same time, I don't know if I would have gotten around to reading it in print, so I'm glad I listened.

All in all, I can see the appeal of this series - I do especially enjoy the titles and covers. It didn't knock my socks off, but it was light and fun and I was happy to spend my commute listening to it.
Posted by 3goodrats at 6:38 PM