The Paying Guests by Sarah Waters (2014) 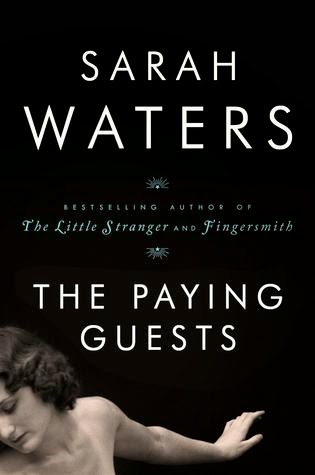 Four years after the end of the Great War, Frances lives with her mother in their house in London. Her brothers both died in the war, and her father soon after, so to make ends meet she and her mother have decided to take in lodgers. When Mr. and Mrs. Barber settle in, they at first are a bit of an inconvenience, but soon Frances becomes friends with Lilian and that friendship blossoms into a much more intense relationship. The situation is one bound to explode, and it does, changing their lives in ways they can't have imagined.

I heard very mixed reviews of this book, but I also know many Waters fans were disappointed in The Little Stranger, which I really liked, so I went into it with an open mind. I really enjoyed it for a while, and then this thing happened that rather ruined the whole story for me.

This is a little tough to write about because most of my thoughts have to do with events that happen later in the book and I don't want to spoil it, so I'll just be a bit vague. I've spent a lot of time thinking about why I don't like the parts that I don't like. I don't want to malign a book just because it didn't go the way I wanted it to (and this plot definitely didn't go where I wanted), because I don't think that's fair. Many times, in fiction and in life, things don't go the way we want. But I need to be convinced that it's possible, that it could actually happen that way, and I'm sorry to say that in this case I am not convinced.

Lilian does some things that I simply can't see her doing. I'm trying to be open - I realize that even in real life people sometimes do things that seem out of character - but I just can't buy it. Lilian is rather weak and wishy-washy and, as written, she would never do anything decisive in this situation. Her feelings for Frances aren't stronger than her feelings for her husband (which are lukewarm at best), and I don't see her disrupting her comfortable married life for a culturally-unacceptable relationship with Frances. So, I absolutely cannot buy the things she does in this story.

However, I did like Frances and found her to be a much more well-crafted character. She used to be politically involved, and she had a social life and a girlfriend, but when their relationship was found out it became somewhat of a scandal. Frances has shrunk into the role of caring for her mother and their house, and she came to spend her days devoted to her thorough cleaning schedule. There's a passage I quite liked early on, where she admits that she misses the War, and says "The big things don't count anymore. I mean the capital-letter notions that got so many of our generation killed. But that makes the small things count even more, doesn't it?" Now it seems like Frances might be ready for more, to get back to living her own life, and I want that for her. I get where she's coming from, and what she's struggling with, and how she has been affected by the loss she has experienced. It's too much that she's now drawn into this other horrible situation. I wish she had never gotten involved with Lilian. I wish Sarah Waters had written a different story for her.

When the big event happened more than halfway through the book, I wanted nothing to do with the situation that was created and I considered stopping right there. But I wanted to give Sarah Waters some credit and kept going right through the oddly abrupt ending. I feel like if your book is already 564 pages, and a rather slow build, it's awkward to suddenly rush the ending, but that's what happens.

Despite all my misgivings, I didn't dislike this novel. In fact, I mostly enjoyed reading it. The thing that happens is pretty far into the book and all was well up until that point. Even then, it wasn't awful (her writing is always beautiful), but it's still my least favorite of all Sarah Waters' books so far. (I still haven't read The Night Watch.) If you haven't read Sarah Waters, definitely don't start with this one, but die-hard fans should give it a try.