The Unfinished Life of Addison Stone

The Unfinished Life of Addison Stone by Adele Griffin (2014) 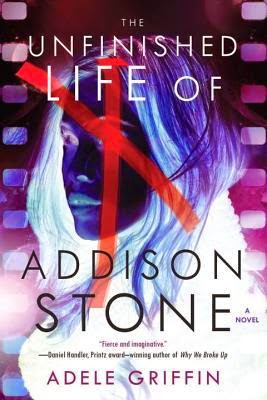 Young artist Addison Stone is dead at 18 after falling - or jumping? - from the Manhattan Bridge. The story of her rapid rise and fall is told through a series of interview excerpts, as well as photos, art, and other bits of ephemera. Her story is told by her family, best friend Lucy Lim, ex-boyfriends Zach and Lincoln, therapists, and associates in the art world.

This is fiction, but felt like a documentary. Griffin has meticulously crafted Addison's persona, even finding a model to be her for a series of mostly candid photos, some of which include her friends as well. Because the story is told through interview snippets, I didn't get into the way I would a more traditional narrative, but it also wasn't as disjointed or difficult to read as I expected. I loved the inclusion of the photos and art, and I wish more books would do this.

Addison was a tough character to warm up to. She struck me somehow as just wild and crazy and pulling stunts to get attention. I know she was supposed to be struggling with mental illness, but somehow I didn't feel very sympathetic towards her. Maybe it was because she just kept becoming more and more successful, as though her eccentricities only increased her fame. Because of the way the story was told, she felt rather distant. She was everyone's darling, but always just out of reach. Her art was brilliant and she was portrayed as a genius, and sometimes it grated on me. For instance, her work was displayed in a gallery show and she declared everything else to be crap. Her agent, Max Berger, agreed with her. It was like everyone adored her so much they enabled her bad behavior. I don't really care about famous young women who behave like brats.

But that's kind of beside the point. This isn't about liking Addison, it's about the tragedy of a disturbed young person who can't handle her own talent - a pretty believable story - relayed through an unusual storytelling format. I wish it had gotten into her home life a little more, because there were so many vague references to her bad home life and inept parents, but that's really my only criticism.

There was also a creepy undertone to what is already a pretty ominous story, because Addison was convinced that she was being haunted. She started hearing voices while staying at her grandparents' house in Dartmouth, MA. She claimed she could hear conversations between Ida, Miss Cal, and Douglas. She became obsessed with Ida, drawing pictures of her, and even after leaving the house she always felt like Ida was with her, talking to her. It became hard to dismiss as a symptom of mental illness, and remained a pretty creepy subplot throughout the novel.

The story good enough, but it was the form that really stands out here. Appropriately for a story about an artist, this book itself if a piece of art. If you like artsy books, or just want to try something different, I highly recommend this one.
Posted by 3goodrats at 8:25 AM