The Winter Sea by Susanna Kearsley (2008) 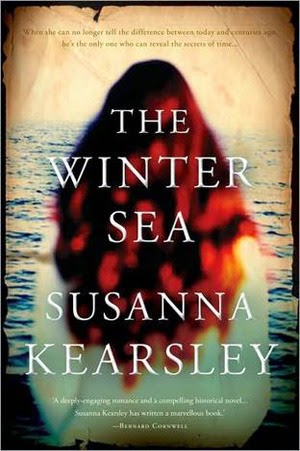 Novelist Carrie McClelland arrives in Cruden Bay, Scotland to visit Slains Castle for her new book. She's writing a historical novel about the 1708 attempt to return the exiled king to Scotland, and Slains is a key location for her heroine, a young woman Carrie names after one of her own ancestors, Sophia. But the story comes easily and powerfully, and her research shows that what she has written is actually true. Meanwhile, Carrie is feeling more and more at home in her little cottage, especially when she meets her landlord's son. The novel moves back and forth between Carrie's story and the story she is writing about Sophia.

I had forgotten how much I enjoy Kearsley's writing. Her style is somehow otherwordly and romantic, even the parts that take place in modern Scotland. I've only read Mariana before this and I found many similarities between the two novels. In each, a woman was being drawn to a particular place and that place somehow connects her with the past. I'm not sure if Kearsley's books are all on this theme, but I like it.

Much more of the book was the back story than the present, which I found a little bit disappointing. I really enjoyed the story about Carrie moving to this little village and finding love while researching her book. But ultimately, there just wasn't a lot to her story and in some ways I'm glad she was able to have a romance without the difficulties that usually plague relationships in novels.

Of course, I liked the backstory too, in which Sophia has more than her share of drama. She arrives at Slains Castle to stay with relatives and learns that they are Jacobites, sympathizers of the exiled Scottish king, James Stewart, and they and their friends are organizing to bring him back. She begins a romance with one of these Jacobites, a man who is wanted by the government and feels uncomfortable revealing their relationship. Between the secret romance and the political intrigue, this story had enough going on to make up for the lack of action in the modern-day story. I got a little bored during some of the history lessons, but I do understand that they are important to the story. They sort of went in one ear and out the other, much like the semester of Scottish History I took during my semester abroad in Glasgow, but I got the parts that were especially integral to the story.

This is neither here nor there, but this is the third book I've read so far in 2015 that mentions this old-timey system where in some houses you had to feed coins into a meter to get power. I guess it's a British thing? It came up in The Likeness and I think also in The Paying Guests, and it's just a weird coincidence because I had never heard of such a system before.

I bought this for my mother a couple of years ago and reclaimed it from her bookshelf after she died. I do wish I had read it right after she did so we could have discussed it. At any rate, I'm glad I finally picked it up. I read this for the TBR Pile Challenge, and it's the only one on my list that was actually in a pile and not just on a list. I kept putting off reading it because it's over 500 pages. Well, I've decided to read one of the long books on my list every month for the first four months of the year so that later if I lose momentum on the challenge, I will have tackled the most daunting books first. Of course, the two long books I've read so far turned out to not be daunting after all!
Posted by 3goodrats at 7:38 PM