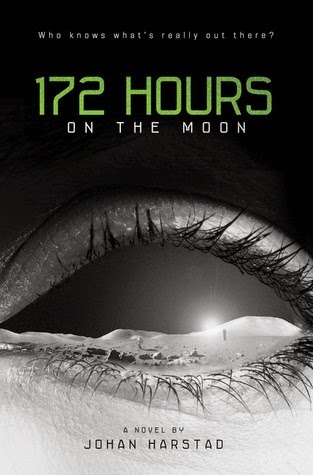 It's been decades since the last trip to the moon, but now NASA is holding a contest and the three lucky teenagers who win will accompany experienced astronauts to the moon's DARLAH 2 station for research. The winners are Mia from Norway, Midori from Japan, and Antoine from France, who all have different reasons for taking the trip. But of course, things do not go as smoothly as planned, and they wonder if they will ever make it back to Earth.

This was a great premise for a novel. There is little hard science fiction in young adult literature, and also it was very creepy. I find space completely terrifying and the threat present on the moon was effectively vague - it's somehow always worse when you don't quite know what sort of danger you are in. The setting is desolate - an atmosphere emphasized by photos of the moon peppered throughout the novel - and there isn't much information about what's going on, but clearly it is very very wrong.

Unfortunately, the writing was weak. Some of the awkward wording may be attributable to the translation from the original Norwegian. But there is no excuse for poor character development and the fact that some of them acted in such improbable ways. When things began to go bad, the adult astronauts acted defeated right away, rather than focusing on fixing the problems (as they do in movies and, I would hope, in real life.) Aren't they trained to deal with catastrophe? And aren't there mental/psychological qualifications to this job? The female astronaut, Caitlin, seemed especially weak and hysterical. But they all failed to do what I think they'd do in real life, which is take responsibility for the teenagers. Instead, they were basically like "Hey, sorry it has to end this way, but you're on your own." At the end, NASA also didn't act the way I think they really would. They would have been extremely involved in investigating what happened.

I didn't hate it, or even dislike it, but the more I think about it, the more criticisms I have. There were a number of dropped threads and unexplained things that didn't really make sense. I read this for my Not-So-Young Adult book group at the library and we spent a great deal of time ripping it apart, but we enjoyed doing so. Isn't that the most fun part about any book group? I think we all thought it was a good idea for a book, but poorly executed. We did all agree that the cover is pretty cool.

Coincidentally, my real life book group is just about to read The Martian by Andrew Weir. I've read some really good reviews of that one, so I'm looking forward to reading it and I'm confident that it will be much better.
Posted by 3goodrats at 1:25 PM

It's a shame about the writing - it does sound like a good premise for a book! I've just started listening to The Martian and am LOVING it so far! I hope you enjoy it too :-)