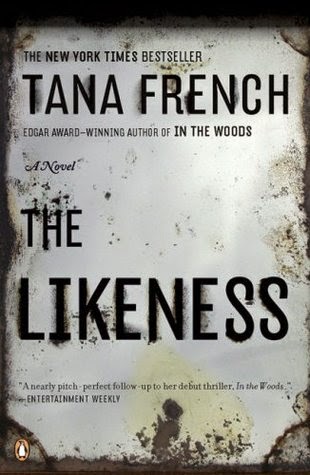 Detective Cassie Maddox is unexpectedly summoned to a murder scene to find that the victim bears an uncanny resemblance to her. Not only that, but the ID found on the body is for a fake identity created for Cassie when she worked undercover. Now she's going under again, infiltrating the household where this fake Lexie Madison lived, pretending that she was only badly injured, not killed, and has returned home. She needs to find out who the killer was and, almost as importantly, who the the victim herself was.

This book was not at all what I expected. Although it's about a detective investigating a crime, it didn't feel at all like a crime novel. Mostly it was about someone pretending to be another person, trying to learn more about her life and her housemates. The group - one other woman and three men - lived in a big old house full of inherited detritus, and they were all graduate students who read and played poker and cooked big dinners together every night. They were eccentric, for sure. They didn't really have friends outside of their close-knit household group, they didn't have a tv, and they didn't go out at night. They listened to records, drank wine, worked on fixing up the house, and were totally devoted to each other. It was completely enchanting.

Even I felt like I wanted to live with this group, and I do not enjoy living with other people. But I can absolutely see why Cassie - who has no living family and lives alone in a drab apartment - was so drawn into this life and wanted to stay as long as possible. And that was a big problem with her investigation. She was so comfortable slipping into Lexie's life, she just kept wanting to live it. As much as she wanted to know who killed Lexie, she didn't actually want the case to be over because then she'd have to go home.

Of course it wasn't as perfect and peaceful as it seems, and she knew going in that these people were hiding something. The whole story unfolded slowly and deliciously and I didn't want it to end. It reminded me a lot of The Basic Eight by Daniel Handler or The Secret History by Donna Tartt. To be fair, I read them both so long ago I barely remember them, so I could be totally off about this, but they are books about murder and eccentric students who are hiding something.

French's writing is just wonderful, the details and descriptions creating an atmosphere that is dark and, again, enchanting. The way she describes the household, it somehow it feels like it exists in another time, separate from the outside world. As much as I felt compelled to keep going and learn all the secrets, I also wanted to savor every bit of it.

The Likeness is second in a series and I haven't read the first one (yet.) I started with this one because my coworker Jenny who recommended it has read all of Tana French's books and this one is her favorite. There are some references to events of the first book, but I didn't feel like I was missing anything. This was chosen for my book group and I think it will be a really good discussion. If you like literary fiction and/or psychological crime, I highly recommend it.

Have you read any of the books in this series? Please share your thoughts in the comments!
Posted by 3goodrats at 12:13 PM

Yay!! I'm so glad you liked it. I recommend for your next Tana French book, Faithful Place. Then the Secret Place. Then Into the Woods. You are right--she is an author who goes way beyond genre.

Thank you - I'll keep that recommendation in mind!