Anna and the French Kiss

Anna and the French Kiss by Stephanie Perkins (2010), narrated by Kim Mai Guest 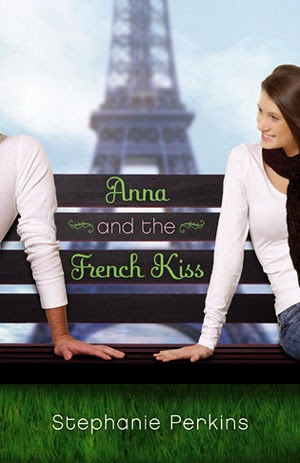 Anna Oliphant is being forced to leave Atlanta her senior year and attend boarding school in Paris. She doesn't know a word of French and is upset to leave her best friend and her semi-boyfriend. But then she meets her neighbor Meredith and, soon after, the adorable and British-accented Etienne St. Clair. With her new group of friends, Paris suddenly doesn't feel so lonely.

Ugh, Paris! I sometimes wish I had rich-people problems. But I do understand that it's difficult to uproot your life during these sensitive, dramatic years. Like many teenage girls, Anna doesn't have a whole lot of self-confidence. Forget making friends, she can't even order a meal at the cafeteria. So afraid to try her French or ask questions, she spends her first several weeks eating only the self-serve options of bread and fruit. But eventually, with the help of her new best friend St. Clair, she is even comfortable going to the movies.

St. Clair...adorable, unavailable St. Clair. You realize this is a romance, right? So their getting together is inevitable, but how do they get there? Even though his relationship with his long-term girlfriend is a bit rocky, he hates change. And Anna just assumes that no boy worth liking would actually like her back (how I remember those days!) So it's a long, slow, delicious crawl to the finish line with these two.

Of course there's lots of other stuff going on to distract them (somewhat) from each other, like St. Clair's mom's illness, and Anna's trouble with her semi-boyfriend back home. Anna is actually pretty interesting; she's passionate about movies and wants to be a film critic. She's exasperated by her father, who writes terrible sentimental novels that are made into worse movies (think Nicholas Sparks). Her best friend Bridget plays the drums and is not taken seriously because she's a girl. But then she has the opportunity to join the semi-boyfriend's band and there is where everything begins to get complicated between Anna and Bridget. Of course it's extra tough to deal with friendship issues when there's an entire ocean between you.

At times, Anna's behavior was painful and embarrassing, but I can't fault it because it is exactly the same sort of painful embarrassing behavior I remember from my own youth. Poor communication is usually a pet peeve for me in romance, but here it was the sort that actually exists. Like not believing what somebody says when they're drunk. That makes sense, right?

This was a great audio choice because it was light and fun and fairly simple, all-around easy to listen to. The narrator was good, but I see that the next two in the series each have different narrators, which is odd. But I'll let you know how they are, because I'll definitely be continuing with this series.
Posted by 3goodrats at 9:00 AM