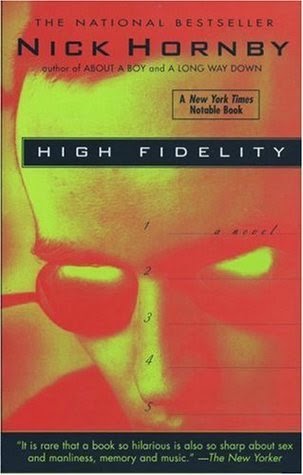 I've been reading Nick Hornby for years and even saw him speak several years ago (I think around the release of Juliet, Naked). But, embarrassingly, I hadn't yet read High Fidelity or Fever Pitch, perhaps his two best-known novels. I began rectifying that this week with a beat-up paperback from the library.

High Fidelity is about a thirty-something guy named Rob Fleming who runs a record store and has just screwed up the most major relationship of his life. It is clear he has not changed or matured since he was a teenager, and he mucks up every interpersonal situation he is confronted with, while being painfully aware he is doing so.

Rob is the kind of guy who just sort of lets life happen around him. For instance, he hired two guys to work part-time at the record shop and they started showing up every day and basically working full-time and Rob just didn't say anything about it. He's also emotionally immature, as proven by his behavior towards his ex-girlfriend Laura after she moves out of their flat and into the new flat of their former neighbor.

Some find Rob unlikeable, but as with all Nick Hornby's characters, I could totally sympathize with him. Yeah, he's far from perfect, but he's so earnest and honest (with the reader, not with the people around him) that I can't help but like him. Don't get me wrong, I wouldn't want to be in a relationship with him, but the people around him aren't perfect either, including Laura. That is what is so wonderfully compelling about this novel though - everyone is realistically screwed up. Of course, this is all wrapped up in Hornby's trademark humor, which I think is another part of what makes Rob so palatable.

It's been quite a while since I've read a Hornby novel (the last was Juliet, Naked in 2009) so it's hard to compare this one with the others. But it has everything I remember from his other novels - the neurosis, the angst, the humor - so I think it's comparable to them. It was sort of a strange choice since he has a new book out that I haven't read yet, but I've heard mixed reviews of it. Has anyone read Funny Girl? What did you think?
Posted by 3goodrats at 12:48 PM

I've read most of Hornby's novels and most of his "Stuff I've Been Reading" essay collections as well, and High Fidelity and Juliet, Naked are my two favorite novels; I think he's at his best when he's writing about music, or people who love music. I enjoyed Funny Girl but it didn't seem to go as deeply into its main character, Barbara/Sophie, as Rob in High Fidelity or Annie in Juliet, Naked. It's set in London in the '60s, though, so it's got that going for it.