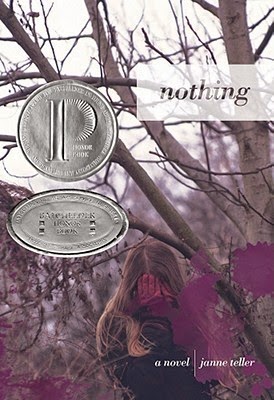 One day, Pierre Anthon realizes that life has no meaning and he leaves his classroom to go sit in a plum tree. His classmates, upset by his new philosophy, decide they must do something that show him that life does in fact have meaning. What they do begins innocently enough, but soon escalates into competitive sacrifice and violence.

It escalates kind of ridiculously, in fact. But I'm not sure this is a story that should be taken literally. It's less realistic fiction, and more existential fairy tale. You know how fairy tales are full of casual violence and don't always make a lot of sense? It was kind of like that. Surreal. It kept reminding me of Your House Is on Fire, Your Children All Gone.

My main question while reading, was why do they care so much what Pierre Anthon thought? I found him kind of annoying. It was rather hard to believe that every kid would buy into this need to prove that life has meaning by doing such crazy stuff, and not one of them would be like "Hey, maybe we're going a little too far here." But again, see fairy tales/not-making-sense above.

I read this for my Not-So-Young Adult Book Group because they wanted some YA in translation. This is the second in translation book (the first was 172 Hours on the Moon). Nothing was definitely better but I am sort of conflicted about it. The writing was definitely superior to our last work in translation, but I didn't find the story especially compelling. It won a Printz Award and John Green apparently loved it, so there's that. It was a very quick read - I read almost the entire thing in one sitting - so I may just need time to process it. I like it a little more as I think about it, though I don't think it's a book I'll rush out to recommend.
Posted by 3goodrats at 7:52 AM