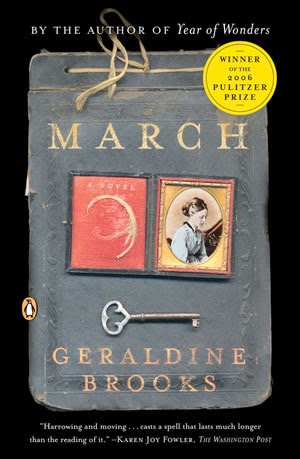 In Louisa May Alcott's Little Women, the girls' father is absent for most of the story, and Geraldine Brooks has written a novel imagining his experiences in the Civil War. Based heavily on Alcott's own father, Brooks has brought to life a man passionate yet conflicted, holding himself and others to the highest moral standards. The Marches have had a long involvement with the Underground Railroad, and when Mr. March eventually goes off to war it's as a chaplain, not a soldier. He abhors violence and is a strict vegetarian. But of course he's not perfect, and when his actions fall short of his own expectations he is the last to forgive himself.

As usual, Brooks inserts the reader firmly in the novel's setting with her evocative descriptions. Details of war and of daily life are equally vivid and make the story feel genuine. Honestly, I kept forgetting that the people this story was based on weren't real, and would catch myself wondering if the real Mr. March was being accurately portrayed. There were some real historic figures in the story though, which is probably why I was so confused. Abolitionist John Brown made an appearance, as did Henry David Thoreau and Ralph Waldo Emerson.

The novel opens while March is off at war, but he looks back and recounts his early years and his marriage. His relationship with his wife was especially nuanced and realistic. They frequently miscommunicated, and some of their misunderstandings were significant. March recalls one particularly important moment when he looked to his wife and saw her approval, yet later when she recounts the same event she clearly did not approve and found his decision a betrayal to her.

Plotwise, the story was primarily about slavery and the abolitionist movement. March got to know some former slaves and their stories were, of course, heartbreaking. When March tried to help, it didn't always work out and he became consumed with guilt. Getting to know these former slaves was an education for March, and as much as he was devoted to his cause it became clear that their situations were more complicated than he realized and it wasn't as easy as he thought to determine how best to help.

There is always something comforting about reading another book by an author I like, especially when I've already heard that it's just as good as her other novels. That's what I was looking for when I picked this up, and I was not disappointed.
Posted by 3goodrats at 9:00 AM