Witches: The Absolutely True Tale of Disaster in Salem by Rosalyn Schanzer (2011) 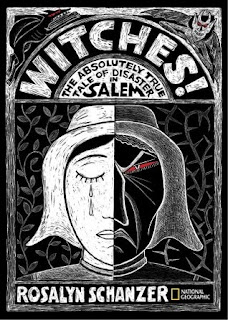 My Not-So-Young Adult Book Group at work picked this nonfiction book about the Salem witch trials. You probably all know the story so I won't summarize, except to remind you that it was about a bunch of people (primarily women) who were falsely accused of witchcraft and executed in Puritan New England. The accusers were young girls who never should have been taken seriously, and the whole thing was pretty tragic. The story has been told many times, but there were a couple of things that made this book unique.

It began with a discussion about superstitious beliefs, specifically the Puritan belief of an Invisible World parallel to our own Natural World, one that housed malevolent spirits. God and the Devil had a complicated relationship in their mind, the Devil used by God to hand out punishment. Also important to take into account are the many frightening events that the Puritan could only explain as signs from God: earthquakes, drought, comets, disease, and war. Other accounts that I've read (and I admit, I haven't read many) started right off with what happened and then attempted to explain it. I liked that Schanzer began with the context.

The other unique aspect of this book, and the most apparent, is the art. The small volume is illustrated with eye-catching designs primarily in black and white, with just a touch of red. They are dark - not just in color, but in tone. Stern men with red eyes point at one another, a judge looks down from a high bench while a demon whispers in his ear, a terrified man flees an orchard while a huge devil flies overhead. Perhaps less accurate than the typical line drawings of realistically-rendered Puritans, these nonetheless add to the overall feelings of terror and confusion so appropriate to the story.

As I tried to come up with discussion questions, I decided to do a little bit of research in an attempt to add value to the discussion. (I've decided that this year I need to up my game in regards to running this book group.) I had a couple of questions so I started by investigating those. First, one of the accused witches, Martha Corey, had an out-of-wedlock mixed-race baby. I would think this would be incredibly scandalous, but what was so interesting is that she was later married to Giley Corey (who was also accused as a witch and died while being tortured). As I thought, sex outside of marriage was not acceptable in this society, but I didn't learn much about the circumstances of her marriage. Was she just so appealing a partner that Giles Corey decided to overlook her youthful indiscretion? As it turns out she was married during her pregnancy, though her husband was clearly not the father. I have been unable to learn much about the circumstances of that earlier marriage, but continue to be intrigued.

My other question was one of context. We talk about these trials like they are unbelievable and ridiculous, but I wondered if they were unique in that society at that time. What other sorts of things could a person be executed for? According to the Greenwood Encyclopedia of Daily Life, there were either 16 or 17 crimes punishable by death (the discrepancy may be that one of the 17 was nonappearance in a capital trial.) Other capital crimes included adultery, blasphemy, sodomy, bestiality, murder, and cursing a parent. And if you think our current court system is unjust, consider the Puritan system in which "spectral evidence" (evidence related to supernatural beings that only the afflicted accusers could see) was acceptable, and many judges and lawyers were without formal education.  So I think it's safe to say that the Puritans may have overreacted to a lot of situations, not just the one involving a rash of alleged witchcraft.

I don't know how this book compares to other teen books on this topic, but it was an easy-to-read overview with some fantastic illustrations, and spurred me to do a bit of extra research that was quite interesting.
Posted by 3goodrats at 11:32 AM