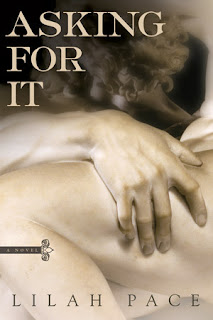 I first heard about this book when someone from the publishing house was on the DBSA Podcast, and I was both intrigued and repelled. Hold on to your hats, folks.

The star of Asking For It is a twenty-something artist named Vivienne, who is plagued by dark sexual fantasies in which she is forced into sex. (She says "rape" but that's not really the right word.) She is ashamed by these fantasies, but it's apparently the only thing that will really float her boat, so to speak. Her last relationship ended because the guy was unable to be what she wanted him to be. It's all very unfortunate. Even more unfortunate is when this guy gets too drunk at a party and loudly alludes to the source of their relationship problems. Within earshot is Jonah Marks, who approaches Vivienne later and basically says that he may have just what she's looking for (as in, compatible desires.) And the race is on. They set up times and scenarios and have limits and a safe word. It's explosively powerful for both of them, and their relationship is strictly sex-only, until it isn't. This is a romance novel, after all.

Before you start thinking this is all a little 50 Shades, let me assure you it's far more complicated. The reason Vivienne feels so much shame and guilt about her sexual desires is because she was raped as a teenager. To be raped and then have what you insist thinking about as rape fantasies is enough to screw up anyone's head. Thankfully, Vivienne is in therapy. This is a pretty significant part of the book actually, Vivienne working through her issues with her therapist, Doreen. Vivienne also has a lot of trouble with her family because the rapist is sort of related in a way that becomes clear as you get deeper into the story.

The book isn't like a therapy session though, nor is it an educational seminar about the effects of rape. Those things were all handled well, but in a way that felt like a natural part of the story. I was surprised and impressed. Plus the characters were believable (both those I liked and those I didn't). The romance story was well-done and felt pretty real, though it was dark. I haven't even mentioned much about Jonah, but he is a private, tortured guy who is extremely respectful of Vivienne's boundaries (and has some of his own.)

I love taboo (see also: Forbidden, Tampa, Perv) but had this been poorly executed in any way I wouldn't have bothered with it. What made me read it was that I heard it was sensitively written, and it addressed something that we like to pretend doesn't exist, but definitely does. It's kind of ballsy of the author to go there at all, but she does it really really well.

The only bad thing about this novel is the title. It makes me cringe so hard. Less now that I've actually read it but, man, it is kind of painful. Though also appropriate. (Clearly I'm conflicted.)

It turns out this is the first in a series, so it fulfills the "start a new series" square on my Winter Bingo card. Which is nowhere near any of the other squares I've completed. Luckily, I'm currently reading something with a white cover. 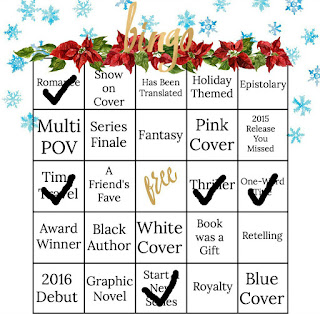