Stiff: The Curious Lives of Human Cadavers by Mary Roach (2003) 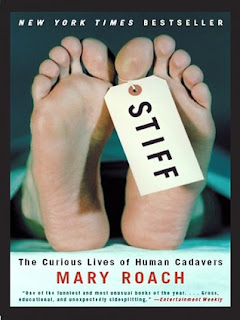 I thought I'd start the new year by reading about dead bodies. Actually, I did something that is really strange (for me) which is that I started a book a couple of days before the end of the year, knowing that I wouldn't finish it before January 1. I really like a clean break, book-wise, from one year to another (and I know I'm not alone in this) although I know the dates on the calendar are arbitrary. But I didn't want to wait to pick up my next book, especially since I finally decided to start one I've been wanting to read for years.

A few years ago I read Packing for Mars and have looking forward to reading more by Mary Roach since then. I hoarded a big pile of books from the library to last me over several days off, and I grabbed two of hers (the other is Bonk.) In Stiff, Roach examines all the ways in which we use human cadavers: primarily in research, but she also describes the information dead bodies provide after plane crashes, looks at the different ways we dispose of bodies after death, and even touches on cannibalism. She is nothing if not thorough.

The first chapter describes a face-lift refresher course in which surgeons practice their techniques on human heads arranged in roasting pans. From there, we get a brief history of the use cadavers in medical research and education which, back in the day, meant hiring sketchy types to produce bodies, many of which were stolen from their graves. But eventually, society became more approving of the use of loved ones' remains, thankfully. Roach includes an entire chapter on the stages of decay and how it is affected by factors including temperature, clothing, what the body is buried in, and a variety of other details. It was while visiting a facility dedicated to studying human decay that Roach decided to refer to maggots as "haciendas" because the word "maggot" is so distasteful. (Have I mentioned her sense of humor? This book is rife with it.) Another chapter is devoted to the definition of death - at what point a person is considered dead. It seems like it would be obvious but, as she so clearly shows, it isn't.

I was surprised at the things researchers couldn't do - or were hesitant to do - with cadavers. In testing bombs, for instance, the preference is to use live anesthetized animals instead. This seems primarily to be a PR decision which, in my view, makes it all the more disgusting. In some cases it makes more sense, scientifically, to use a live creature instead of a dead one because a cadaver's lungs are deflated and don't behave the same way. (Though I still don't condone animals research, just for the record.) But in many cases it seems like a case of people just being irrational. I've never understood why we are so hung up on what happens to our bodies after we die. It's true that I might not want to know exactly how a loved one's body was being used in research because I imagine it would conjure up a vision that would be hard to get out of one's head. But the fact is that a cadaver can't feel anything and is of no other use, so why not use it to learn something?

Many scientists have had no issue whatsoever trying experiments that are the stuff of horror novels, as I learned in what I found to be the most distasteful chapter of the book. Of course there is always someone willing to try any idea that pops into their head and seems remotely possible, so it's inevitable that people have tried to reanimate heads of the decapitated. And why not sew a dog's head to another dog's body? The less said about that chapter the better.

As you can see, Roach has left no stone unturned in her research and reporting and that's the way I like it. She mentioned a number of things off-hand that I immediately went online to read about (such as necrophiliac Karen Greenlee). So much interesting stuff was packed into this book! If you like nonfiction that is fun and entertaining as well as educational, you may want to check this out.
Posted by 3goodrats at 7:15 PM

I've been meaning to read a Mary Roach book forever and this is the one at the top of my list. If you're in the mood for another quirky death book, try "Smoke Gets in Your Eyes: And Other Lessons from the Crematory" by Caitlin Doughty. It's funny and morbid and fascinating, but it also made me think about death and what I want to happen to my body after I die.

I LOVED Smoke Gets In Your Eyes! Another, less quirky, book somewhat along the same vein is Being Mortal by Atul Gawande which is all about end-of-life care. Not as morbid but still very interesting.