Recently I read a few shorter books so rather than trying to get a whole post out of each of them, I'm combining the mini-reviews in one post here. 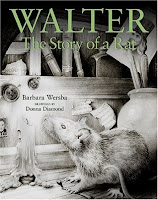 Walter: the Story of a Rat by Barbara Wersba, illustrated by Donna Diamond (2005)

I spotted this on a coworker's Staff Picks shelf at my library and grabbed it immediately. Walter is a rat who, for unknown reasons, was born knowing how to read. He's lived in a number of places during his life, but now lives with a writer of children's books named Miss Pomeroy. He loves it there because it is peaceful, he gets plenty of food, and all the books he could ever want. Walter knows how people generally feel about rats, but decides to take a risk and writes a note to Miss Pomeroy that says, "My name is Walter. I live here too." The next day he receives a note back from her: "I know."

This story was just as adorable as I had hoped, and I love that the illustrations are so realistically rendered. That is what a rat actually looks like, and he is extremely cute. I will likely read this again before returning it to the library.

It really is a coincidence that I happened to read two rat books in a row. This one was mentioned on a blog and I had it sitting around for a while before I impulsively read Walter first. Devotion is a short story, but published as an adorable, tiny standalone volume. When I say "adorable" I really am just talking about the physical book, not the content. The story is about a young woman who buys her first house where she plans to live with her 4-year-old daughter. But she starts noticing a lot of rats around, and comes to find out that her neighbors, two elderly sisters, are feeding and harboring a whole houseful of rats. It's pretty weird and upsetting. Meloy's writing style is deceptively upbeat, not what I'd expect of such a dark story, but it works quite effectively. I really liked this little story. I could almost hear the rats scurrying about with their thousands of little claws scraping at the floors and walls....

There are no rats in Bitch Planet, unless you count the Fathers, the patriarchal evil men in charge who send "non-compliant" women away to their own prison planet. The women are strong, diverse, and have potentially interesting back stories, though I don't feel like I really got to know any of them much. The rather vague plot involved some sort of sports event, in which the women are being encouraged to enter their own team for reasons that didn't seem super clear, but maybe were related to entertainment value. The women decide to do so because they think they can actually manage to prove something (and possibly kill some important people in the process?) I'm not super clear on it all actually.

The art isn't really my style and, as I said, the plot seemed a bit weak. But I like the overall premise and the women in the story. My favorite parts were the satirical ads, and especially the discussion guide in the back. I love discussion questions when they are good, and these were probably the best ones I've seen. Granted, the ones I have seen generally suck, but these are actually really good. So if you're looking for something a little different for your book group, you might want to try Bitch Planet.
Posted by 3goodrats at 8:00 AM