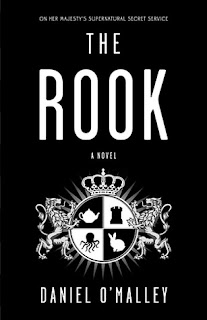 Myfanwy (rhymes with Tiffany) Thomas wakes up in a London park surrounded by bodies wearing latex gloves. She's holding a letter that begins: "The body you are wearing used to be mine." She soon learns that the old her works for a secret organization that deals with supernatural problems and knew that she was going to be wiped of all her memories. She had given her new self two options: leaving for a new life, or continuing to be Myfanwy Thomas, Rook of the Checquy. Of course she chose the second option and, guided by the many letters and large binder of information with details about her job and people around her, she set out to fit back into that life and hopefully figure out who has betrayed her.

Not only does the Checquy investigate supernatural activity, but members of the organization have their own powers. Not everyone, but members of the Court, such as Myfanwy do. The Court are the leadership positions and are named after chess pieces. Myfanwy is one of two Rooks and can control people by touching them. Even weirder was the other Rook, Gestalt, who has four bodies. So outwardly it appears to be four siblings, but actually they are all controlled by one mind. I loved this idea, and the possibilities it engenders.

I really enjoyed the supernatural elements of the story, which I found quite unusual and creative. An unexpected surprise was the humor, which I always enjoy, though at times it approached slapstick. Still, despite all the elements here that I liked, there was just so much of it. From the outset there are a ton of info dumps. This is necessary because of the whole premise of the book and Myfanwy's reliance on the information her former self left for her, but it meant a really slow start that never quite picked up to the pace I wanted. I also had a hard time keeping track of all the characters and their positions. The 480 dense pages were tough to get through, and I came very close to putting it down almost halfway through, despite my commitment to finishing books that are for book group. But the book I planned to read next was at work so I kept going. Once I got over that hump it got a bit easier, but I never really got into it the way that I had hoped.

Another thing I found interesting - and I'm not sure if this is a criticism or not - is that she refers to her former self as a different person. I get that your memories and personality make you who you are, and she was definitely different after all of that was wiped, but she was still Myfanwy Thomas. It's not as though another person jumped into that body. I look forward to discussing this issue at book group because it's such an interesting idea.

Some people love this book, and I've heard great reviews of the audio version. But although I didn't dislike it, it didn't really work for me.

Interestingly, there is a list of suggested reading at the end and the first book on the list is Doomsday Book, which I loved. I guess I can see how the two are similar but in terms of which is better, there's no contest in my mind. I haven't read any of the other books on the list so I can't comment on them, but I do love the idea of providing a list of suggested reading for those who want to find similar titles. All books should have this!
Posted by 3goodrats at 7:30 AM