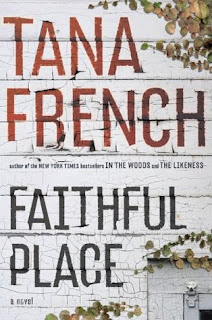 More than 20 years ago, Frank Mackey was making plans to run away with a girl named Rosie Daly. But the night they were supposed to meet, he arrived to find only an ambiguous note that seemed to be telling him she was going to England alone. Now, at the same abandoned house where his heart was broken so long ago, somebody finds her suitcase hidden away. Frank returns to the street where he grew up, dreading what he would find, but determined to uncover the whole truth of what happened that night in Faithful Place.

The night that Rosie never showed up to meet him, Frank left the neighborhood anyhow, and with good reason. His family was poor and his father was an alcoholic who abused his wife and kids. Frank left and became a cop, which definitely didn't endear him to the people in his old neighborhood and the distance grew even more. It was good to see his brothers and sisters again (he had two of each) even though he didn't really get along with all of them. By the time he returned, he was divorced with a 9-year-old daughter. Although Frank put on a pretty cold, tough front he was utterly devoted to his daughter and it was clear that he had been in love with Rosie Daly. Otherwise, he would have been pretty hard even for me to like.

This is my second Tana French book after The Likeness, and it was a similar reading experience in some ways. It's dense and long but it's easy to get lost in the characters and their lives and though it's not exactly a page-turner it still has a pretty good momentum when you get going. She does a great job of creating characters who feel real, and the Mackey family and the other neighbors really came to life here in all their boisterous working-class glory.

I guessed the killer early on which is pretty strange for me, but I was never quite sure until it was all revealed. This story doesn't rely on shock or surprise though, it's more about the psychology of the relationships. The Likeness was better in my opinion, but Faithful Place is still a solid 4-star book.

This is the fifth book I've read for my TBR Pile Challenge, which means I'm halfway there!
Posted by 3goodrats at 8:00 AM

I enjoyed 'In the Woods' but I haven't read any of her other books yet. I love her dense, but gripping writing style so I've no idea why I haven't read more of her books. I'll have to get a copy of 'The Likeness' soon.

I read The Likeness more than a year ago and couldn't figure out why I hadn't read more of her books since then, which is why I put this one on my TBR Pile Challenge. She has a unique style that I really like!