The Kind Worth Killing

The Kind Worth Killing by Peter Swanson (2015) 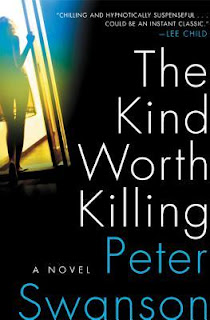 While waiting for a flight back home to Boston, two strangers meet in a London airport bar. After several martinis Ted admits that his wife, Miranda, has been cheating on him, and jokes that he wants to kill her. Lily casually agrees that she deserves to die and offers to help. From here, the two get more involved as they form their plan, but there's a lot that Ted doesn't know about Lily and that neither of them know about Miranda.

I was first struck by the idea that murdering a spouse was somehow preferable to just getting a divorce. It's an awful lot of trouble to go through, and you might end up in jail because of someone you hate. But Ted was rich and his wealth was at stake, and it seems like money can be a huge motivator in crime. In the beginning, I was also rather taken aback by how casually Ted and Lily were discussing this murder they were planning. It seemed sort of unreal, but also disturbing real. (The night I started reading the book I had an upsetting dream that I killed someone and couldn't figure out how to hide the body.)

So at the outset I wasn't sure how I felt about this book and was not especially excited about it, and then...then, the first half ended and the second part began. Here, there was a game change and that is when things got really interesting and it became a whole different kind of book. The least said about this the better, but I just want you to know that if you start reading this and you're not sure whether to keep going, you should because it gets really good about halfway through.

The narrative viewpoint switches from chapter to chapter, sticking with Ted and Lily for the first half of the book. As it progresses, though, the narration shifts around to different characters and, oh, it is not at all what I thought when I started. I'm sorry for doubting you, Peter Swanson.

Once things really got going I couldn't put the book down, and I really didn't know how it would all turn out. It kept me guessing until the very end. I hate to make direct comparisons, but I think those who like dark, psychological crime novels like Gone Girl or Eileen will likely find this one as satisfying as I did.
Posted by 3goodrats at 8:00 AM