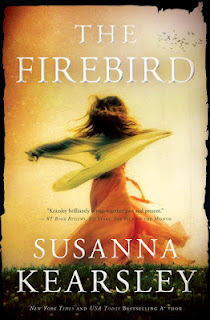 A woman with a small carved bird arrives at the gallery where Nicola Marter works, and although the object is appraised and considered to be without value, Nicola knows this isn't true. She has a gift and when she touched the carving she saw far into the past and knew it was a gift from Catherine I of Russia. With the help of her ex-boyfriend Rob, who is also gifted in a similar way, they set out on a journey to prove that what they know is true. Along the way they learn more about Anna, the young woman who received the gift, and also began to reconnect to each other.

This is the second in the series that began with The Winter Sea. The only connection I could see is that Slains Castle appears in both books, as do Jacobites. But in reading the author's note at the end, I found that one of the characters from this book was also in the last one, I just didn't remember because I read it a year or so ago. At any rate, this could definitely be read as a stand-alone.

The psychic abilities of the main characters in the present-day part of the story sets it apart from the other books I've read by Susanna Kearsley. In those the more paranormal elements are related to a place as opposed to being powers the characters have. At first I was a bit put off by the psychic aspect as I consider it to be complete nonsense, but somehow I came round pretty quickly. Kearsley's writing has such a dreamlike quality to it that I can more easily suspend my disbelief and get into the story, and it is fiction after all.

The main conflict between Nicola and Rob is their differing approaches to their abilities. Rob, who works as a cop in Scotland, is completely open about what he can do and doesn't pretend to be anything other than who he really is. Nicola, like a sensible person, keeps her abilities to herself because she lives in the actual real world where you can't just tell people you're psychic and expect to be treated like a sane person. (Not that I'm taking sides here, nope.) But of course in the world of this book, they do have these powers so I was a bit conflicted and a little tense about how it was going to all work out (because it has to work out between them, right?) I really liked Rob a lot. Aside from his unfailing honesty, he is considerate and generous and kind. Plus his Scottish accent was quite charming in my head.

Part of what made me want to read this (besides being the only book of hers available on Overdrive when I looked) is that the back story takes place partly in Imperial Russia. One of the characters is the Empress Catherine I - not the famous Catherine, but the one before that who was married to Peter the Great. Many parts of the story take place at the Winter Palace in St. Petersburg, which was very cool since I have been there.

Through much of the book I thought it wasn't as good as The Winter Sea, but it got very interesting late on in the story and I was so satisfied by the end that now I no longer feel like I can compare the two with any sort of accuracy. I think I hit a slump at one point which is related less to the book and more to the fact that I was reading it near the end of my vacation and first part of being home. If I had kept up my reading pace I think it would have been a more consistent experience. I really liked all the characters here, the Russian setting, and both the present day and past romance stories.
Posted by 3goodrats at 7:30 AM