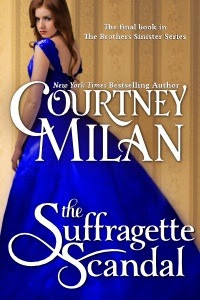 Frederica "Free" Marshall runs a newspaper called the Women's Free Press and is an outspoken proponent of women's rights. Naturally, this garners outrage from those threatened by the idea of female power. She finds an unlikely alley in the mysterious Edward Clark. Abandoned by his family and presumed dead, he has returned to town to find that his brother is trying to bring down Free Marshall and her newspaper. Of course they are working together in business only because Free can't stand such a rogue as Edward, and Edward basically doesn't have feelings. Right? As it turns out, they may be perfect for each other.

Free really was different from other romance heroines. Historical novels always star a fiesty forward-thinking woman, but this is the first I've encountered to do things like get herself checked into a government lock hospital for prostitutes (which existed to stop the spread of syphilis) in order to get a story about how terribly women there are treated. She is absolutely fearless and dedicated. Neither was she a blushing flower when it came to sex. She talked about it quite frankly and when the time came to get sexy with Edward she was unapologetically passionate. Edward was a bit irritating in his angst, and some of his decisions were questionable to me, but I could definitely see why he and Free were drawn to each other.

One of my favorite parts about this book was a subplot romance between two women. How I wish they got their own novel! I'd love to read a historical lesbian romance. Free's friend Amanda was outcast from her family for choosing not to marry and when she met and became attracted to Genevieve she kept questioning whether Genevieve was also attracted to her, or just really really friendly. Opening up about their affections to each other was especially risky at this time.

It's no secret that I love humor in my romance and Milan apparently excels at this. I loved the banter between Free and Edward! Early on, Free tells Edward that he's pronouncing "suffragette" incorrectly and explains, "Suffragette is pronounced with an exclamation point at the end. Like this: 'Huzzah! Suffragettes!'" To which he replies "I don't pronounce anything with exclamation points." This becomes a running joke, she occasionally accusing him of using an exclamation point, he making some excuse ("I just borrowed it from you!") They also joke about Edward having a puppy-cannon (until he sadly explains that he doesn't actually, because it would be so unkind for the puppies.) They also write some amazingly hysterical letters to each other. But the funniest part has to be the Ask a Man advice column in Free's paper. The questions are things like "Dear Man, I have heard that women are capable of rational thought. Is this true?" The replies, written by another favorite character, Stephen Shaughnessy, are witty and biting and I could probably read an entire book of these columns.

If you read it, don't miss the author's note in the back (at least in the ebook version) where Milan describes the amazing women on which she based her characters, and discusses just how realistic Free is. She also talks a bit about her use of the word "suffragette," which may or may not have actually been used at the time this book takes place. Courtney Milan does her homework!

I loved all the suffragette/newspaper aspects of the story, and was hooked from the very beginning. The relationships, the dialogue, and the nasty villain kept me turning (virtual) pages until I reached the very satisfying end. Despite being a series finale, it's the first book I've read by Courtney Milan, but I imagine it won't be my last.
Posted by 3goodrats at 7:30 AM