Much Ado About Nothing

Much Ado About Nothing by William Shakespeare (1598) 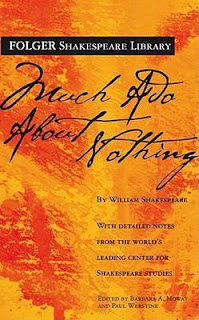 I've just finished the third play for the Bardathon Challenge, and the first of two comedies. Much Ado About Nothing is two love stories twined together with some double-crossing and mistaken identities and lots of witty repartee.

Claudio and Hero want to get married until he is led to believe that she has been carrying on with another man like some sort of wanton hussy. Then she faints and her family pretends she is dead so they can see who feels guilty about the deception. Meanwhile another couple, Beatrice and Benedick, are constantly at each other's throats, and obviously totally attracted to each other. Both are determined not to get married at all, and as they sling insults back and forth others step in to trick them into admitting their attraction.

Reading a comedy was a relief after all of the murder and killing of Macbeth and Hamlet. I was already familiar with Shakespearean insults but it was great to read so many in context. This play really was very funny. A constable named Dogberry (and that's not even the funny part) was called an ass at one point, and goes into this whole speech in which he kept interjecting that he is an ass: "But masters, remember that I am an ass, though it be not written down, yet forget not that I am an ass." And in the following scene reminds everyone again, "And, masters, do not forget to specify, when time and place shall serve, that I am an ass." As with the other Shakespeare plays I've read, the plots aren't fantastic, but I guess it's all about the language which is both appealing and vexing.

I've stuck with the Folger edition for this play as well. I tried an Arden again, but although they come so highly recommended, I just find the format very hard to read. Each page has a small amount of text and more than half of the page is footnotes, which seems less orderly than the Folger editions, which have the text on the right and explanations on the left. I was also looking at some No Fear Shakespeare editions, which instead of definitions and explanations have "regular language" text on the facing pages. I think I'd rather have the explanations, but I can see how those editions could be very helpful as well.

I only need to read one more play to complete my goal for the challenge, and the one I've chosen is A Midsummer Night's Dream. I keep feeling inclined to pick it up, but I want to wait until summer for the proper atmosphere. Recently I checked out a copy of Shakespeare's complete sonnets, but the most famous one ("Shall I compare thee to a summer's day?") was ripped out of the book, so I returned it to the library (and we're replacing it.) But I may try some sonnets again in the future since those are less about plot and more about language, which is what he really excelled at.

I've also learned that the Museum of Fine Arts will be presenting a production of Cymbeline this summer, so that might be the performance that I will attend for the challenge. If so, I will want to read the play before going. And the Commonwealth Shakespeare Company will be performing Love's Labour's Lost on Boston Common this summer. I'm not a big fan of the crowds that will be there, but perhaps I'll convince myself (and probably a friend) to attend one of these performances as well.
Posted by 3goodrats at 7:30 AM

The Kenneth Branaugh movie version of this play is great, and not even just because it has Denzel Washington in leather pants.

That is excellent to know - thanks!