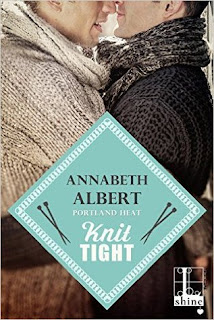 Brady works as a barista at The People's Cup in Portland, OR. Only 23, a tragic accident has left him the de facto parent of his family, raising three small children along with his 18-year-old sister. But he'll soon be competing in a barista contest with a cash prize that could change their lives for the better. When a local yarn store owner falls ill and her nephew comes into town to care for her, Brady is suddenly reminded of all that he is missing while working so hard and trying to keep his family together. Evren's presence at the coffee shop's Knit Night is a welcome distraction for Brady, and maybe this new guy is exactly what he needs. But can they be more than just friends with all the complications both their lives are throwing at them?

I read a review of this romance novella on Smart Bitches Trashy Books, which gave it an A. A Portland, Oregon based romance with a coffee shop and knitting? Um, yes please. Two young guys helping each other out with family problems in a sensitive and compassionate way? Be still my beating heart. Not to mention that Evren is Turkish and has a really sexy accent (in my head, at least.)

This is the first male/male romance I've read, and while I know that most of them are written and read by women I somehow have felt like...like they are not for me? Like it's some weird kind of voyeurism to read about a romance between two men because, I don't know, it has nothing to do with me? By that logic, obviously, I also shouldn't read romances about young people (so, most of them) or historicals or those with non-white characters. Ultimately a romance is just a story about two people finding love so in that way it felt like every other romance I've read and I didn't feel odd about it at all. Even during the sex scenes, which were very...um...thoroughly described.

It did seem like everything happened quite fast. When I thought that a month or so had passed, it turned out that it was several months, although it didn't seem like they had been together many times at that point. Consequently it felt almost like insta-love. One conflict between the characters is that Brady is bisexual and Evren (like most of the world) has huge issues with that. He claims to have had two bisexual partners in the past and was hurt by both of them, and so presumes that Brady would cheat on him and therefore doesn't want to get involved. This is a great storyline and a great opportunity to debunk some myths, but it felt like it wasn't delved into enough. I felt like the issues needed to be worked through a bit more. All of this compressed timeline and glossing over of problems may be because this was a novella and perhaps it should have been fleshed out into a longer novel. I know I would have liked to get more of Evren's story, especially more details about his past relationships that make him hesitant towards Brady at first.

But the real problem with the story was this: Evren knit a pair of socks for Brady and I did not feel that Brady was enthusiastic enough when he tried them on. I mean, come on, there is little that is more luxurious than a pair of hand-knit socks. I expected moaning and sighing and stroking of ankles here. Brady, you do not deserve hand-knit socks.

I was rather drawn in by the cover (I mean, look at those sweaters!) though it seems inaccurate. I'm pretty sure both of these guys have long hair and the one on the left could be hiding a ponytail or a bun (Brady wears his hair in a bun) but the guy on the right definitely has short hair. It didn't really occur to me before, but in most romances we have pictures of at least one character on the cover and I really could have done with some visual representations of these guys.

At any rate, this was a rather sweet story even if it left me wanting a bit more. Brady is such a great guy, who is working so hard to keep his family together, and I can't think of a character who is more deserving of happiness. There are some very sad times in the story for sure, but they help build the relationship between the two heroes, and I was glad that most of the emotional turmoil was about legitimately serious stuff rather than their own angst. Overall it was a pretty decent story with characters I liked spending time with and a satisfying conclusion.
Posted by 3goodrats at 7:30 AM