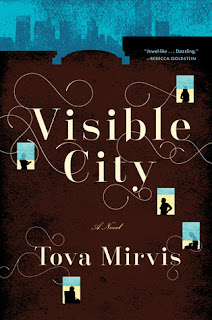 A stay-at-home mom in New York City begins spying on neighbors through their apartment window. Her absentee husband begins skipping work to do research at the public library. A young woman moves in with her parents temporarily to heal an injury but is reluctant to return to her fiancé. The lives of all these people begin to intersect in unexpected ways, ultimately forcing them to confront difficult truths in their lives.

When I received this book as a gift a couple of years ago, I was quite intrigued by the premise of people in the city all spying on each other. It's kind of what we do in cities, like it or not. Everyone is so close to each other, it's almost impossible to avoid seeing or overhearing something. We are protected by our anonymity - who cares what people see of us when they are complete strangers? But in this novel, the strangers meet and actually get to know each other.

Nina embraced the urban proximity that gave her such a close perspective on the lives of others, and when she met Leon, one of the neighbors she had been watching, she dove in. Left alone for long hours with only her children while her husband worked ridiculous hours at his law firm, she was enchanted by what seemed like comforting intimacy of the middle-aged couple she watched. Of course, real lives rarely match how they look from the outside.

Leon's wife, Claudia, was an art historian researching stained glass windows, and her work turned out to be a fairly major plot point. It tied into some construction going on that made Claudia extremely aggravated because it disrupted her work. Another character involved in this stained glass window plot was Arthur, who lived in an apartment with a dog named Churchill and was constantly writing angry notes to the other residents about proper building etiquette. I've not even lived in such a building, but this character seemed very familiar to me, and I was glad he ended up playing a larger role.

The connections between all these characters were improbable for sure, yet we do have connections we are discovering all the time, and probably many we never realize. I'm sure some people would find the intersection of characters too contrived, but somehow it really worked for me.

So many observations in this book resonated with me. When Leon came upon some protestors "...he wished their placards conveyed not the slogans written in bright, bold letters, but the quieter internal ones, such as Afraid of Change, or Need Outlet for My Anger." When Nina wanted to know more about Claudia and Leon she became frustrated that Google can't provide access to their conversations or private thoughts. Haven't you had a time when you felt an urge to Google something completely unreasonable? It does seem like we should be able to find anything we want on the internet.

The observations and insights came frequently, and I made a lot of notes while I was reading. The huge amount of fodder for discussion would make this a great choice for a book group. I'll admit that although I liked the setup from the outset, for the first several chapters it all felt a bit flat. But then somehow the characters and their lives became more full and vivid. It may just be that there were several different characters and the short chapters devoted to each meant that it took a while for them to take shape. Either way I was quite glad it came together for me, because I liked the whole idea of the story from the very start and I wanted it to live up to its potential, which it did. It gave me lots to think about!

Visible City is one of my TBR Pile Challenge titles. I don't want to brag, but I only have two books left on my list. It would be super cool if I finished this whole challenge by halfway through the year, but I don't know how likely that is.
Posted by 3goodrats at 7:30 AM