Grunt: The Curious Science of Humans at War by Mary Roach (2016) 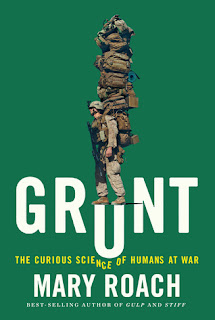 In Mary Roach's new book, which will be out in just a couple of weeks, she explores the science behind day-to-day aspects of being at war. Each chapter focuses on a different topic: clothing, transport, noise, heat, diarrhea, maggots, stink, sharks, underwater disaster, sleeping on submarines, and two chapters devoted to genital injuries and reconstruction.

I learned a little bit about a lot of different things, though to be honest I think I forgot most of it instantly as I moved on to the next topic. (This isn't Mary Roach's fault.) Some parts were pretty memorable. I learned that the reason humidity is so wretched is because your sweat doesn't evaporate and can't cool you down. That maggots are incredibly effective at cleaning wounds, but aren't practical because of the associated costs. And that "On top of its other charms, the maggot breathes through its ass." I also learned that the military pays $35 a gallon for rabbit poop, which makes me regret all that we wasted when we had a pet rabbit. (Sandfly larvae feed on a mixture that includes rabbit poop.) And how a military operation could go awry from the all-too-common scourge of traveler's diarrhea, and the impracticality of zippers or velcro to a sniper.

At times it was a bit of a slog, but was still filled with her trademark humor and frequent tangental footnotes, both of which made the experience more enjoyable. It was definitely interesting, but I think the nature of the science she was looking at this time is just more....science-y than her others. Topically, I suppose it's closest to Packing for Mars in the degree of focus on hard science versus human behavior (Bonk) or an overview of all the ways cadavers are used in research (Stiff). But somehow Packing for Mars still seemed a little more fun. Perhaps because space exploration is just a more positive experience than going to war. Either way, this is probably my least favorite of her books, but that might not be the case for someone more interested in war and the military.

I received my copy of Grunt courtesy of the publisher. I was not compensated for this review.
Posted by 3goodrats at 7:30 AM