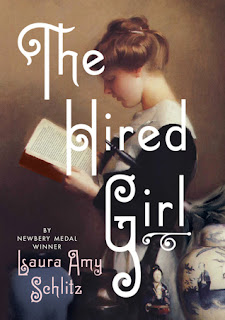 It's 1911 and fourteen-year-old Joan lives on a farm with her father and brothers. She loves reading and wants to become a schoolteacher when she grows up. But when her father forces her to quit school her dreams are dashed. It becomes more and more hopeless until one day he crosses a line by burning her books. So Joan leaves the farm and goes to Baltimore where she lies about her age and gets a job working for a Jewish family called the Rosenbachs.

This could be the end of it but Joan, who started calling herself Janet as part of her new identity, is immature and prone to drama and jeopardizes her place in the Rosenbach household again and again. The things she does are stupid, but also believable for a 14-year-old who is a hopeless romantic. Luckily the Rosebachs are nice people and Janet is a hard worker who they (mostly) like, so they didn't cast her out. But still, it was rough going!

The novel is written as Janet's diary, so we get everything from her point of view as it happens, complete with all her internal turmoil. As I said, Janet is immature and impulsive and dramatic, and it would be easy for those traits to make an annoying character, but she isn't at all. She desperately wants to experience more of the world - education, romance, fun - and being stuck in her day-to-day drudgery sometimes pushes her over the edge. She wants to be a good person though. She's not at all averse to hard work and definitely earned the money the Rosenbachs paid her. She also wants to be a better Catholic, which is why she set up appointments for one-on-one instruction with the local priest. She also struggles with her newfound love of material things, now that she had enough money to buy them. She feels that she should save her money, but she is easily convinced to instead buy a new hat or a parasol. I think anyone who has left home and started generating their own income can relate to this. For all her faults though, she's a very strong young woman who stands up for the things she feels are most important, and I really admire that about her.

At times Janet really made me laugh. She so wanted her life to be glamorous, lamenting that real life wasn't nearly as glorious as the opera, and feeling disappointed in herself when she found her stomach rumbling during times of great crisis. "Heroines in books don't eat when their hearts are broken," she lamented. During a conversation with a friend she expressed disapproval at girls playing sports, saying "I believe ladies should vote and be doctors and maybe even be President, but they should stay tidy and not perspire." Like the good Catholic she was, she prayed frequently and would relate the response she got to her prayers, which was a mixture of wisdom and practical advice, like being reminded of the importance of loyalty, and that if she buys a new dress she should consider that pink tends to fade quickly. I found it all delightfully hilarious.

I felt very immersed in this story, the way I have from other historical books about young women such as Anne of Green Gables and I Capture the Castle. It was somehow cozy and familiar while still being a fresh new story. This is a book that I will likely recommend often.
Posted by 3goodrats at 7:30 AM