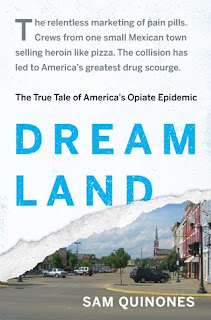 Unless you've been living under a rock (or not in the United States), you know that the past several years has seen extremely high rates of addiction and death from the use of heroin and other opioids. Unlike drug epidemics in the past, this one isn't confined to cities or a particular social demographic. It's in the cities, the country, small towns, and effects people of all races and socioeconomic categories. For a while it was not talked about much because of the stigma, but recently it has gained a lot of national attention and brought about local movements and community meetings to try and figure out how to deal with it. But how did this happen? Why now? And what makes this epidemic different from others? These are the questions Sam Quinones answers in his book.

Basically, there are two separate things which, because they happened to coincide time-wise, created the perfect storm. One is that a bunch of Mexicans from a particular area began selling very potent black tar heroin in small cities where heroin wasn't already readily available, and they had a brilliant business model that brought in atypical customers. Rather than having to skulk around unsavory areas, people could just call a cell number and get heroin delivered to them in a conveniently-located parking lot. They always got the same amount and it was always quality, and so was the customer service.

The other trend was in the medical field and had a few different parts to it. A couple of doctors had written a letter to the New England Journal of Medicine in which they noted that patients given narcotic painkillers in one particular hospital during a certain period of time almost never got addicted. It wasn't a real study and was only a paragraph long, but from it other doctors and the drug industry got the idea that these drugs weren't addictive. Around this time, a company called Purdue developed an opiate called OxyContin and heavily marketed it. Previously, these kinds of drugs were only given to terminally ill patients because of fear of addiction, but now it seemed like everyone was given the green light to prescribe them after surgery, for sports injuries, or for chronic pain. And they did.

It became extremely easy to get this new wonder drug, and many questionable clinics began opening up and prescribing it liberally. You may remember seeing news stories about the dangers of OxyContin addiction and overdose. Eventually, many pharmacies stopped filling the prescriptions from places they knew were shady and legitimate doctors pulled back on it a bit. OxyContin is pretty similar to heroin, so for people who became addicted to the former, it was an easy move to switch to the much cheaper no-prescription-needed latter.

The book covers these trends in detail through the stories of doctors, drug dealers, and addicts. It was super interesting, though I did have a hard time keeping everyone straight. The chapters were very short, most around 3-5 pages, which made it more digestible for those of us who aren't big nonfiction readers, but also made it harder to keep track of the storylines. Still, I learned a ton and got pretty angry several times. I've never had much love for pharmaceutical companies, and this only cemented my negative feelings about them.

I heard about this book when it was published last year and sort of vaguely thought it sounded interesting and informative, but it was only when I read my friend Kevin's review in the Christian Science Monitor that it solidified as something I really had to read. And it only took me a year and a half to get around to it. If you're at all interested in social trends, problems, or specifically the current drug epidemic, this is a must-read.
Posted by 3goodrats at 8:57 AM