The Girl With the Lower Back Tattoo

The Girl With the Lower Back Tattoo by Amy Schumer (2016), narrated by the author 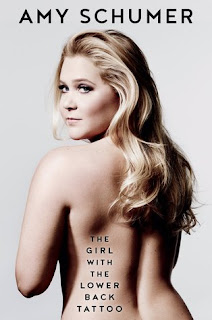 Although I'm not much of a tv watcher and have only seen clips of her show, I have long admired Amy Schumer for her feminist wit and down-to-earth style. And I really liked her movie Trainwreck. In this collection of essays, Schumer writes about her family, relationships, and career. Many of her topics are serious, but her trademark humor shines through, and since I listened to the audiobook I got to hear her read it all to me.

She grew up with money - new money, as they call it - and is very candid about what it was like to be from a modest background but be wealthy, and then to lose it all as her family did. I really appreciated that she talked about this because money is such a taboo topic in our society and I think it's a shame that we're so secretive about it. I especially enjoyed her anecdote about playing with lobsters on the floor before cooking them, which I also did as the child of a lobster fisherman (the opposite of wealthy, but we still ate lobster frequently.)

She has a very close relationship with her sister Kim, which I loved hearing about. They were arrested for shoplifting together and got terrible ill-advised tattoos together. They are pretty much BFFs and Kim appears in many of her essays.

I really liked an essay about her experience when she was very young and worked at a camp for people with disabilities. She took the job only because a boy she liked worked there. When she arrived, she was assigned not to the children as she had hoped and assumed, but to the senior ladies. These women didn't try to impress anyone, weren't afraid to ask for what they wanted, nor were they ashamed of their bodily functions. Though the situation wasn't what she had expected, Amy realized, "I had finally found my people."

A firm believer in the "fake it 'til you make it" school, Amy once got a job because she pretended that she had gotten a second interview. She just showed up and said she was there for her second interview and the employers just assumed someone screwed up and didn't tell them. She did whatever she wanted at her jobs too, and as much as I like her I wouldn't hire her. (Of course her strengths quite obviously lie outside of traditional jobs.) Although I'd never in a million years act the way she did at these jobs, I kind of admire her bravado, and her determination to find a job that fit her rather than trying to conform herself to a job.

On the more serious side of things, she talked a lot about her dad who has MS, and didn't spare anything about what that means in all it's sad messy details. She also revealed an abusive relationship she stayed in longer than she likes to admit. Most tragically, she discusses the movie theater shooting at a showing of Trainwreck, in which the shooter specifically chose that movie and women as targets.

So this wasn't 8 hours of stand up, as some of the reviews seemed to expect. It was just one imperfect human offering up her thoughts and insights about her life. I found her very relatable and introspective and inspiring. Parts were funny, other parts were serious, but it was all great. I also read some reviews of the audio that were critical about her performance, calling her flat and bored-sounding, but I completely disagree. She sounded like a person narrating an audiobook and I'm glad that's the way I chose to experience this book.

What else? There was more poop in these essays than I expected. I was happy to find through an internet search that she's still dating the guy she talked about meeting through a dating app in one of the essays. She's friends with a lot of professional wrestlers. She's Jewish, and really likes even the most disgusting foods of her people. I just really enjoyed everything about this and getting to know her through her stories only makes me like her more. She's not otherworldly like some celebrities who seem incredibly distant from our own real-life experiences. She's one of us and she's not afraid to show us all the ways in which she is imperfect: "I wear my mistakes like badges of honor and I celebrate them. They make me human."
Posted by 3goodrats at 7:30 AM