The Forgotten Garden by Kate Morton (2008) 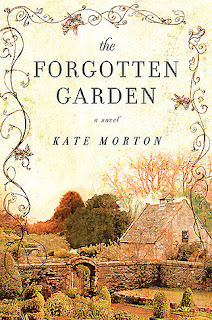 In 1913, a little girl is hidden aboard a ship in London that is bound for Australia. When she arrives alone with nobody to meet her, a young couple take her home and raise her as their own. When she's a young woman, Nell's parents tell her the truth of her origin in their family. In 1975, Nell travels to Cornwall using the few clues she has to try and find out who she really is. In 2005, after Nell dies her granddaughter is surprised to inherit a cottage in England, and she sets out to visit the property and learn more about the original owners and the connection to her own family. Moving between characters and time periods, each gradually reveals bits of the whole story, and all the secrets and betrayals and heartbreak along the way.

Blackhurst Manor houses the unhappy Mountrachet family, which in the early 20th century was headed by Linus and Adeline. Their daughter Rose is a sickly girl, not expected to live to adulthood. Her life is unexpectedly brightened by the arrival of young Eliza, long-lost relation of Linus, and the two girls become fast friends. But of course we know this is part of a story in which a little girl ends up traveling halfway around the world alone, effectively abandoned, so obviously all doesn't go incredibly well in this family. Nell's granddaughter Cassandra has suffered her own heartbreak, losing her small family in a tragedy she has been unable to recover from. Visiting Cornwall to explore her new cottage, though, gives her a big project but also forces her to reach out to others and maybe even forge new bonds.

The garden of the title is on the land of Blackhurst Manor, tucked away between the cottage and an elaborate maze. Yes, there's a maze in this book! Also, I want to live in this cottage. A woman going to a new place and fixing up an old house is literary catnip for me. But all the delicious and terrible family secrets that go along with it make it even better. Often when a book moves back and forth between different characters and time periods the stories are not equally enjoyable, but I liked all the parts of this novel.

Kate Morton has been on my radar for a while now and I'm glad I finally read one of her books. They are all long-ish so I kept putting it off, but then I had a vacation and it seemed the perfect time to dig into a good long story. I couldn't think of a better book to read this fall while curled up with a mug of tea and an afghan. Keep it in mind if you're looking for a twisty family tale this fall or winter.
Posted by 3goodrats at 7:30 AM