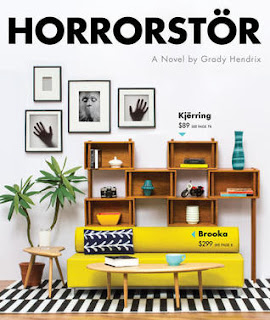 It may look like an IKEA catalog, but it's actually a very clever and funny horror novel that takes place in a store called Orsk. ("Questions? Just Orsk!") Orsk is an IKEA-like store (though IKEA does also exist in this world), complete with labyrinthine showrooms, assemble-it-yourself furniture, and meatballs. But there's something more going on in the Cleveland Orsk store, and manager Basil is determined to figure out what. Thinking that someone is sneaking in after hours and wreaking havoc, he recruits Amy and Ruth Anne to stay overnight and investigate.

Basil is super uptight and is always quoting the corporate dogma, while Amy is just biding her time until she can get transferred to another store. I'd say Amy is in her 20s probably. Ruth Anne is in her 40s, doesn't seem to have much going on outside of her job, and is eternally optimistic and pleasant. They aren't very chummy with each other and make an unlikely team, and of course they have no idea what they're really in for. (Hint: it's much more sinister than what they expect.)

Look, this isn't going to win any literary awards. The plot is not completely without holes, the characters aren't terribly well-developed, and the writing can be a bit clunky in spots. But it's very good at what it is, and I kind of loved it. I love satire and horror and comedy and it's all of those things. But it's the presentation that really gives it that extra special something. As I pointed out earlier, it looks like an IKEA catalog from the outside, but that design carries through the book. Each chapter begins with a catalog page highlighting a particular piece of furniture such as the Brooka, Liripip, and Hügga, complete with descriptions and available colors and they are all relevant to the story. The furniture and catalog copy become more...unusual as the story progresses.

It's not super-scary, but I do have a special love for and fear of creepy buildings so it worked for me on a horror level even while I laughed at the Orsk corporate culture. I always want to be reading horror in October, and I'm so glad I happened to have some time between library books to finally pick up this book that's been sitting on my shelf for a couple of years now. It's not my last horror novel of this month either - I'll be posting about a newly-released teen horror novel sometime soon!
Posted by 3goodrats at 1:51 PM