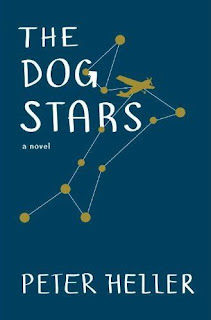 After sickness has wiped out most of the population, Hig lives in an airplane hanger with his old dog Jasper. His wife died, seven months pregnant, of the flu several years ago. Later came a "blood sickness" and there are still survivors, including a small settlement that Hig occasionally visits in his old Cessna. Mostly he sticks to himself, socializing only with his neighbor Bangley.

The atmosphere of the novel is one of loneliness, at least for the first half. Hig has little interaction with other people, just living day by day, not knowing what the future holds. He muses, "Would I stand on a train platform and wait for a train that hasn't come for months? Maybe. Sometimes this whole thing feels just like that."

The distinct narrative style is characterized by many sentence fragments, keeping the pace slow, but not in a bad way. Hig explains that two straight weeks of fever had "cooked my brains." His thoughts can be scattered and unfocused, but they are illuminating.

My only small complaint is that the dialogue can be difficult. Without quotation marks it's always a little confusing and mostly he used other means to convey speech, but the few conversations between more than two people were hard to follow. It was also sometimes hard to tell if Hig was thinking something or speaking out loud, but it was hard for him to tell as well, as used as he was to being alone and talking to himself.

I've always loved a good post-apocalyptic novel, and this is indeed a very good post-apocalyptic novel. Not as bleak as The Road or as difficult as Riddley Walker, it embodied some of the best aspects of this kind of writing, without the nightmares and with a bit more hope. The ending left me wondering if there would be sequel. As much as I'm tired of series right now, for this I would welcome a follow-up.
Posted by 3goodrats at 9:00 AM