Sugar Changed the World: A Story of Magic, Spice, Slavery, Freedom, and Science by Marc Aronson and Marina Budhos (2010) 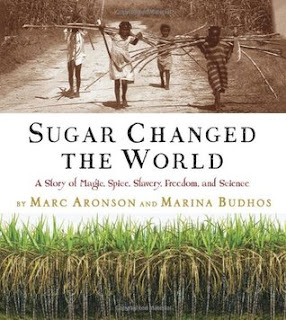 In this nonfiction book for teens, two authors who discovered they both had sugar in their family history attempt to tell the story of sugar - tracing its history and examining its relationship to slavery. The scope spans the globe and a very large portion of human history, condensing it all into just 125 pages, including photos and illustrations.

I've wanted to read this book for quite a while. It's been on the local high school summer reading list for several years, so there are always lots of copies at my library in the summer. My Not-So-Young Adult book group at work often enjoys non-fiction, so we finally picked it.

Although I was drawn in by the stories of sugar production and the lives of the slaves transported in order to work on the plantations, only parts of the book were as compelling as I had hoped. Unfortunately, it suffers from the same problems as many textbooks I had to read in school, which is that it often lays out principles and events in an abstract way that is very difficult, if not possible, to visualize.

For instance, geopolitical events were mentioned but not really explained, like "...the Roman Empire began to crumble," which is the sort of thing that used to drive me nuts as a kid (and, if I'm being honest, now) because what does that actually mean? What does it look like? There's a section late on in the book describing those who ruled the sugar colonies saying "...they often used the courts to maintain control, not to administer justice." As an adult who has learned a fair amount over the years, I can imagine what this might mean, but I think a teenager would maybe read this sentence and just sort of shrug and keep going. Other pieces of information were just left out. We learn about how thousands of people were brought from Africa to the Caribbean islands to work on the sugar plantations, but I really wanted to know who was there before the Europeans and the Africans. Were there natives, or were these islands uninhabited?

This was all frustrating, but at the same time I understand that the scope of this book was enormous and if everything I felt was missing was to be added, it would probably be 400 pages long and I'd never read it. Some omissions, however, were less excusable. There was a decent amount about indentured workers, but what that meant was never clearly explained. A simple, clear definition would have sufficed. The Haitian Revolution was described, but never named. If I read this as a kid and was later asked if I knew anything about the Haitian Revolution, I'd probably think that well, I read something about a revolution in Haiti, but was it THE revolution?
I had other minor quibbles with it as well. The authors set out to pull their own family histories into the story, but didn't follow through. In a couple of parts the text would promise that this is where Marc or Marina's family would come into the story, but then never mentioned them again. There was also some jumping around in time and geography that I thought was a little confusing. They presented sugar as being extremely central to things like the industrial revolution and the Louisiana Purchase (which they suggested should have been called the Sugar Purchase) and maybe it had an important role, but I wonder if it was really as central as they were making it out to be.

At the same time, I really like that the authors wrote about the history of slavery and abolition (and various other things) by focusing on the production of sugar. Sugar is something we're all familiar with and descriptions of its production and role are easily described and give us something concrete with which to surround all of these more abstract concepts. I think this book would be great in a classroom where there's lot of discussion and many of the concepts that are only touched upon could be more fully explained and discussed to help everyone understand the larger concept. Upon reading it, I'm very disappointed at its inclusion on the summer reading list, since that means it's meant to be read independently over the summer without any discussion or context.

My overall feeling was that the book was only ok. However, I'm guessing my view isn't a popular one, especially since this book has won awards including a Best Book of the Year Award from School Library Journal. I learned some things from it, but it wasn't the pleasurable or exciting read that I had hoped for.
Posted by 3goodrats at 7:45 AM