The Wild Rose by Jennifer Donnelly (2011) 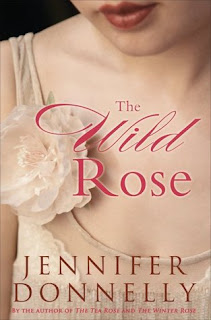 The third and final book of the Tea Rose trilogy follows Seamus Finnegan, brother of the two subjects of the previous books, and Willa Alden, the daring adventurer and love of his life. Previously, they had been hiking Kilimanjaro together when Willa became badly injured. Seamus managed to get her to safety, but her leg could not be saved. Though Willa begged Seamus to let her die, he insisted the doctor operate, and Willa was so upset she didn't want to see him again. Except that she's just as madly in love with him as he is with her, so in this book they continue to come together and separate, come together and separate, like some sort of tidal movement.

The Great War is upon us now, which gives this book a slightly different tenor from the others. A large part of the novel is also set in Arabia, where Willa is traveling with her friend Tom Lawrence, a.k.a. Lawrence of Arabia. There is a great deal of drama, anguish, and near death for both Seamus and Willa, as well as those around them. Things keep happening that seem like they will be kept apart forever, but based on the first two books I knew that was not a real possibility. The fun, though, is figuring out how they'll get around the seemingly insurmountable obstacles. Oh, and there's a whole subplot involving spies blackmailing others into helping them out.

The characters we got to know in the last two books are here again, too. Fiona and Joe have a whole batch of kids now, and India and Sid travel from California to London and are around for much of the story too. The family runs a hospital in England for soldiers returning to the war. Fiona and Joe's oldest daughter, Katie, has begun a political newspaper and hopes to follow in her father's footsteps by running for office. Oddly, a woman could run for office before she being old enough to vote during this time.

There's over 600 pages just packed with all these people (and more!) and their lives over the course of several years, but I read it in just 6 days. It's not only an immersive reading experience, but one that's very easy to jump right into every time I sat down with it. Sometimes it takes me a while to get into a book when I sit down with it, but every time I picked this up the very first words would draw me right in.

One of the things I like the most about this series is that it doesn't matter how long it's been since reading the last one. Each one is about different characters, and though characters from previous books are present and their stories still relevant, Donnelly gently reminds us of those stories without huge info dumps.

Through much of the book, I felt that it was probably my least favorite of the series because of the wartime setting. But there's a spy story here which, even though I'm not into spy stories, got really really good and by the end, I liked this one every bit as much as the others.

I can't believe these books haven't not yet been adapted for the screen. They'd make an excellent series, with each book providing enough story for a whole season. There's so much fodder here, what with all the relationship drama, secrets, war, travel, adventure, and dangerous villains. I really loved this series from beginning to end.

This is the third book I've finished for my 2017 Personal Reading Challenge, which normally would make me feel like I'm ahead of the game. However, since I added more to my reading challenge this year I'm only feeling like I'm not quite behind. The part of the challenge that involves specific titles is going fine, but the categories all feel very uncertain so I may need to buckle down soon and make some decisions about what books I want to read for each.
Posted by 3goodrats at 10:05 AM