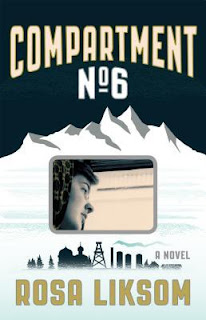 A young, unnamed Finnish woman leaves Moscow on a train heading for Mongolia. She is most unfortunately joined in her compartment by a boorish man who discusses women and sex openly and crudely. The woman is put off by him, but as time passes they slowly form an unlikely friendship of sorts.

Slowly over the course of the novel we learn about why the woman is taking this trip, what it is she's getting away from, and eventually feels ready to face. But at first we hear only her stated reason for travel, which is to see some petroglyphs, and learn that she has recently been in a relationship that maybe hasn't been going so well.

She hardly speaks at all during the novel. She doesn't have to, as her crude compartment partner talks a lot in between drinking vodka, which he chases with bites of raw onion. He tells a lot of stories, as do others she meets on her journey. But the woman is mostly silent, looking out the train windows at the landscapes and towns they pass.

These descriptions were, for me, the primary beauty of the novel. It all feels so real. For a while I've fantasized about doing just this - taking a train all across the vast expanse of Russia - and Liksom brought this experience vividly to life. The images of broken down equipment, maimed and dead animals, and the harsh landscapes were startling and beautiful. Adding to this tableau was the ever-present soundtrack of classical music by Russian composers being piped through the train.

The girl looked out of the icy, windblown rear window at Russia's wild beauty. A sparkling, violet-yellow cloud of snow covered the entire landscape as they passed, sometimes forming a wake of snow and flakes of ice that trailed behind them like a veil. A frosty field of thistles glittered and gazed darkly from the edge of the forest. Far off on the horizon a pink powdery smoke drifted, thick clouds broke up and flapped like a child's sheets in the sky.

Whenever I read such lovely writing in a translated work, it makes me wish I knew how it compared to the original. But, alas, I don't read Finnish so I'll trust that what I'm reading is true in tone and style to what the author created.

But it's not just 200 pages of a woman staring out of a train window while a man tells her stories of the debaucheries of his youth. There were stops along the way, the train breaking down or needing to stop for a couple of days so the engine could cool. During these times the woman went into the towns, even taking a hotel room now and again, meeting a few people and stocking up on provisions. This is the Soviet Union though, so these excursions meant standing in long lines and buying not necessarily what she needed, but what was available.

This novel is not plot-driven by any means. The bits of conversation or visits in various towns are broken up by long stretches of quiet descriptions of what the woman sees as she travels. I loved experiencing the journey vicariously through this young woman and I was, in turn, disgusted and amused by the man she was forced to share it with. If you too would like to take a train journey across Russia, you might well enjoy this novel.
Posted by 3goodrats at 7:30 AM