The One Hundred Nights of Hero

The One Hundred Nights of Hero by Isabel Greenberg (2016) 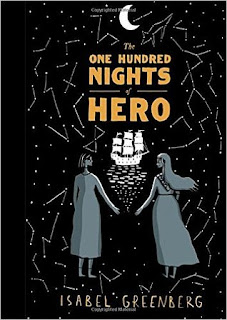 This inventive graphic novel begins with a creation story of Early Earth. From there, it becomes a tale about two men and a bet. A husband will be leaving his wife, Cherry, for 100 nights and when his friend doubts her loyalty and obedience, they make a bet: if he can seduce her while her husband is away, he will win her and her husband's castle. But he doesn't count on her cleverness or her devotion to her true love, a woman named Hero. Cherry knows if she doesn't submit to this guy he'll just take her by force, but when she requests they hear a story told by Hero before going to bed, he relents. Hero begins storytelling and one story leads to another and the man is captivated. So, of course, is the reader.

Like Scheherazade saving her own life by telling tales in One Thousand and One Nights, Hero tries to spare the life of her love, Cherry. But although I'm not very familiar with that story, I'm fairly certain this one is much more feminist. These stories are primarily about women protecting each other, usually from men, and many are about sisters.

I really enjoyed the art work a lot. Color is used sparingly but boldly, and I really liked the visual style of the writing. Small panels are interspersed with larger and full-page artwork that was quite striking.

I've not read anything else by this author, but she has apparently written other books that take place in Early Earth. The Goodreads description says it can be read as a standalone, though it doesn't say much else.

I probably wouldn't have picked up this book based on a description of the plot. As I said, I'm not terribly familiar with One Thousand and One Nights and I'm not especially drawn to it. But I read about this on a book blog somewhere and whatever the blogger said about it made me immediately request it from the library. When it came, I couldn't remember why I wanted it, but trusted it was for a good reason. It was!

If you like feminist retellings of classics in graphic novel form, you should definitely check this out!